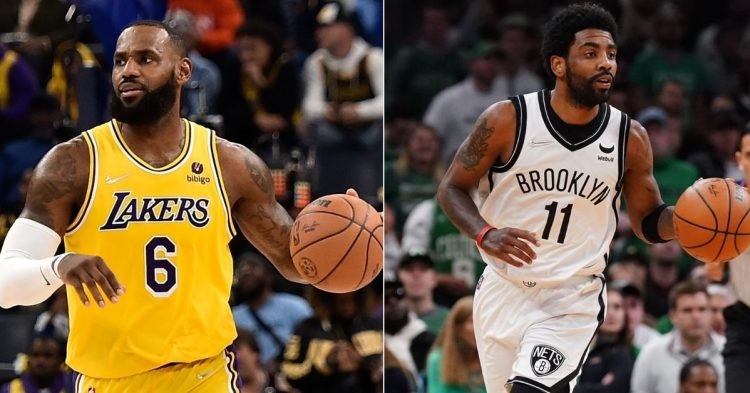 LeBron James and Kyrie Irving won the 2016 NBA championship for the Cleveland Cavaliers. This is considered one of the greatest and most unique finals wins as they were down 3-1 to the Golden State Warriors. The duo soon parted ways when Kyrie left following the 2017 NBA Finals. Reports have emerged that LeBron is pushing his organization, the LA Lakers, to make a move to get Irving.

Kyrie is an otherworldly scoring talent. However, he has not had much success since leaving King James. Moreover, Irving’s teammate Kevin Durant has already asked for a trade from the Brooklyn Nets. Therefore, it is quite likely that Irving will move on from the team as well.

It is no breaking news that LeBron has always been active in creating a competitive team to surround himself with. This has earned him the nickname “LeGM“. He has made several good moves regarding changes and improvements to his team’s roster.  Chris Bosh, Kevin Love, and Anthony Davis were all recruited in some form or manner by King James.

This is only one side of the story. LeBron also used his position to urge the Los Angeles Lakers to hire Russel Westbrook. Moreover, one must wonder how many of the veterans in the Lakers squad the previous season were there thanks to James.

Reports have emerged that King James might be using his influence to pressure the Lakers into trading Russel Westbrook for Kyrie Irving. and that he “wants Irving in Lakeland” This would allow old teammates and former champions to reunite once more.

Kyrie Irving on why he left LeBron James and the Cavaliers

Kyrie’s skillset would take pressure off both Anthony Davis and LeBron James. This would certainly be an upgrade looking back on the Lakers’ struggles last year. Adding Irving would not only guarantee them a spot in the playoffs, but it would also make them championship favorites.

The talks between teams are still in the preliminary stages. Therefore, it is unclear and quite difficult to predict where Irving will end up. The Lakers management might not agree with LeBron and trade a bad situation for a potentially worse one. Therefore, they could just end up rejecting the King’s desires and asking him to play with the team he has.