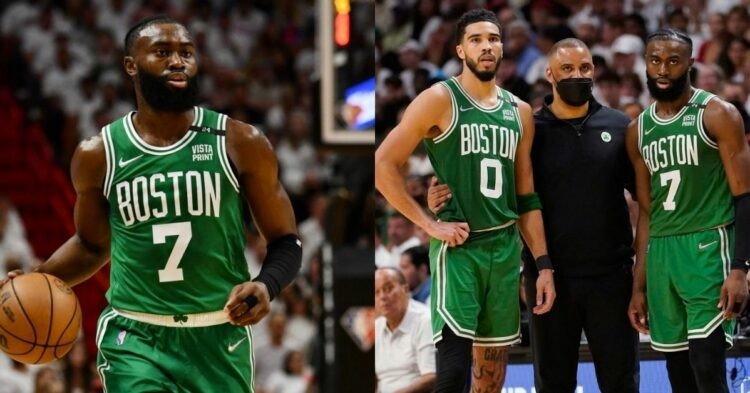 The Boston Celtics stole a game on the road to take a 3-2 series lead in the Eastern Conference Finals. Jaylen Brown and Jayson Tatum‘s second-half heroics saved them in this crucial Game 5 against the #1 seeded Miami Heat.

The Celtics recognized that they almost threw the game away in the first half but the Heat wasn’t capitalizing on it. Miami set a franchise record for most missed three-pointers in a playoff game last night. A three-point lead in the second half vanished almost instantly when the third quarter started.

However, they traded a couple of buckets before Boston took a commanding lead. To face this Celtics team in TD Garden to tie the series once again will be a difficult job for the Heat, especially with the starting lineup shooting poorly.

Miami Heat will be facing elimination on the road but Jimmy Butler and co are not worried about it. They have the confidence that they will pull it off and push the series to Game 7. The Celtics on the other hand, are conscious.

After a huge second half, Jaylen Brown discussed the possibility of the C’s advancing to the NBA Finals for the first time in over a decade. They are not dismissing the #1 seeded Miami Heat yet, but at the same time, he has confidence in his squad.

Miami Heat will be hungry for a win in Game 6. After several 40+ point games, Jimmy Butler is unable to cross the 20-point mark. He has been shooting poorly alongside Kyle Lowry and the rest of the starters. Only Tyler Herro’s return can turn things around for them in the elimination game.