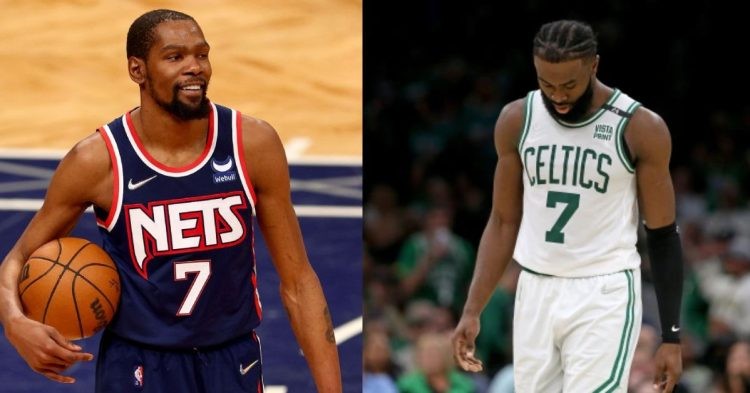 The Boston Celtics are coming off a trip to the NBA Finals. The last time they made it that far was more than a decade ago. Jayson Tatum and Jaylen Brown are the two cornerstones responsible for the recent success that the NBA franchise has seen. Be that as it may, the Celtics hope to remain in contention and look to trade for Kevin Durant.

The Nets and Celtics entered trade discussions for Kevin Durant, per @ShamsCharania

KD asked for a trade from his team less than a month ago. Since then, the NBA world has been on edge, wondering whether the Nets will heed his request and where his potential destination would be in the event that they do. The Phoenix Suns and Miami Heat seem to be likely destinations for Durant to compete for a title and hopefully finish his career with. However, recent reports suggest that Boston is discussing trade options with the Brooklyn Nets.

It is next to impossible to predict Durant’s future destination. This is because he is a player of immense value and the Nets are looking for an equal trade. One must wonder whether they are demanding too steep a price for KD. This is where the conflict in finding a good deal lies. On one hand, you have Durant who wants to join a star-studded team to win a title. On the other, you have a team looking to get equal star power in return for the 2x NBA champion.

There are very few teams in the league who can afford to trade away star talent and still hope to have enough left to win a title with the addition of KD. The Boston Celtics are one of these teams as they have two young superstars. Jaylen Brown might have just proved he is the better player on the team during the NBA Finals.

One must wonder whether the Celtics should keep Tatum or keep Brown. This could be an interesting discussion in itself. Be that as it may, at the moment Jaylen seems to be the one they are looking to move to the Nets in return for Kevin. He shared a tweet with the caption “smh” which refers to simply shaking one’s head in disappointment or disbelief.

Due to differing contracts, JB alone wouldn’t be enough value for KD. The Celtics are willing to add Derrick White and a draft pick to the trade. However, these will still not be enough to satisfy the Nets. They demand that the Celtics also add Marcus Smart to the deal. Therefore, it is still too early to say if KD will be heading to Boston anytime soon.