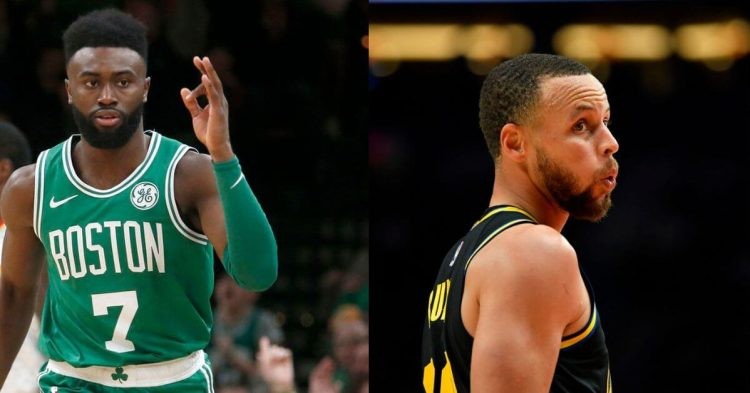 Stephen Curry and the Golden State Warriors have locked horns with Jayson Tatum, Jaylen Brown, and the Boston Celtics in the NBA Finals. Brown was instrumental in a pivotal Game 1 on the road. He has been the most consistent player for his team and is now the latest frontrunner for the NBA Finals MVP.

The MVP award is given to a player each season for commendable play and success in the regular season. However, the Finals MVP is to highlight who is the best player on the best team that wins it all. It is considered equally prestigious if not more than a regular Most Valuable Player award.

Steph has never won a Finals MVP in his many trips to the NBA Finals. Therefore, this has been a huge point against him by his critics. Many stated that he absolutely needs to win a Finals MVP to solidify his legacy as one of the top 10 players of all time.

Brown doesn’t seem to care about this. He seems to have forgotten that he is not considered the best player on the team. That title falls to Jayson Tatum, especially in the eyes of the media and analysts. However, Brown seems intent on leaving them baffled.

The young Celtics star has dominated the NBA Finals stage in his first trip there. He has been pivotal in the Celtics having a chance to put the Warriors in a 3-1 deficit. This has led analysts and ratings across to raise his chances of winning the NBA FMVP over Stephen Curry.

Jaylen Brown rises to the No. 1 spot on the Finals MVP ladder after a big Game 3! 😤 pic.twitter.com/VHF7mFD8Wl

JB may have a winning effect and can use his size and athleticism to dominate the game. However, statistically, and on paper, he is barely close to performing at the level of the former unanimous MVP from the Golden State Warriors. He has been outscored by Curry in every game so far.

Finally, in Game 3, Brown had 27 points, 9 rebounds, and 5 assists. This performance catapulted his case for Finals MVP. However, this does not make complete sense as Curry finished the night with 31 points, 4 rebounds, and 2 assists.

One must definitely wonder how Jaylen is ahead when Steph is averaging more than 30 points a game in the NBA Finals. He helped win game 1 on the road and was the leading scorer in game 3. The FMVP is given to a player on the winning team. Perhaps, this is why JB has crept ahead in the race to win it.