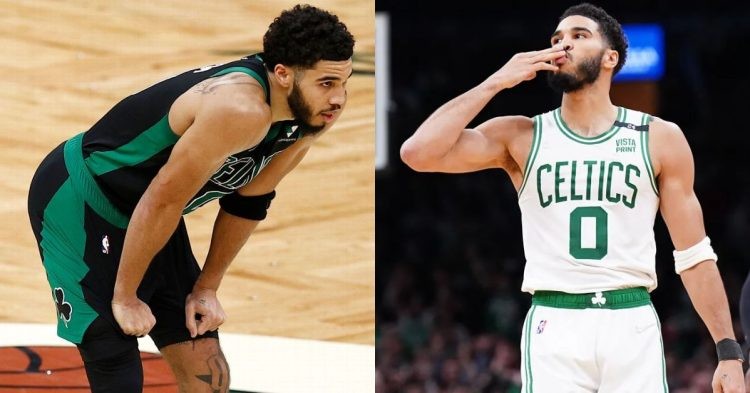 Jayson Tatum is coming off one of the most successful years in his NBA career. Alongside Jaylen Brown, he managed to carry the Boston Celtics all the way to the NBA Finals to face the Golden State Warriors. Despite having a 2-1 lead in the series, the Celtics lost in 6 games.

Being the franchise cornerstone, Jayson certainly feels a sense of guilt and accountability for losing 3 games in a row to Steph and company. He recently revealed that a huge change and adjustment in his eating habits were necessary after feeling tired during the NBA Finals.

The Boston Celtics currently have a solid record of 7 wins and 3 losses right now in the NBA season. We should wonder what changes Tatum has made to his diet and whether the results are noticeable in terms of impact on the court.

Jayson Tatum thinks his diet will give him an edge

We already know how important good and healthy nutrition is for the optimal functioning of an elite athlete. JT clearly struggled during the NBA finals. He shot only 36.7% from the field and led his team in turnovers. He realized that his endurance was one of the biggest reasons for his being unable to perform at his best. As a result, he decided to completely stop eating fried food and take his diet seriously.

“That was part of something I wanted to change from my experience in the finals and my level of fatigue was like… I want to eat better, I’ve never been on a diet, I’ve always been able to eat what I want. But I’m just trying to find a way to give myself an edge. Like eating more consistently, eating better, losing body fat, trying to gain muscle. Getting a chef and having him prepare 3 meals a day.”

He was then asked what specific change he was making to his diet, “Not so much eating more fried food…like french fries, yeah.”

There must be a large population of people who empathize with Jayson’s goal and struggle in developing his body. Food and exercise are definitely the yin and yang of what is required to improve one’s ability. We already know that Milwaukee Bucks superstar Giannis Antetokounmpo has managed to make an incredible physical transformation over the years. Hopefully, Tatum will follow in a similar manner.

Tatum improving his diet certainly seemed to have helped so far. He is averaging 31.2 points, 7.5 rebounds, and 4 assists so far in the 2022-2023 NBA season. Considering that his career average is only 21.2 points, we can conclude that this new diet is already helping.
Tags: Boston CelticsJayson TatumNBA
Previous Post