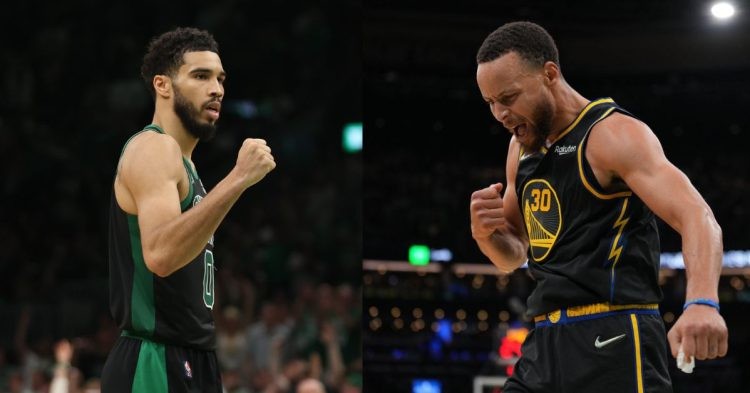 Jayson Tatum and the Celtics have been fighting a hard battle for the NBA finals against Stephen Curry and his Golden State Warriors. It’s no secret that both of these players are hardcore competitors on the court but that doesn’t mean they can’t be nice to each other off the court.

There is no denying the greatness of what Stephen Curry has been doing during the finals this year. After game 4, his point average during the finals was higher than Tatum’s FG percentages. Steph was averaging 34.3 PPG, on the other hand, Jayson Tatum was shooting just 32.1 percent from the field.

But the NBA Finals aren’t over yet and as things stand, the results could go either way.

Jayson Tatum is in awe of Stephen Curry

While these two have been battling it out on the court, Jayson Tatum had some nice things to say about Steph in a pre-game interview. In the NBA world where players are constantly going at each other’s throats, it’s kind of refreshing to see a competitor praise their peer.

“Everybody know he’s a great player, one of the greatest.”

With that being said, Tatum can say all the nice things in the world but it still won’t save him from this Warriors squad that has only one goal in mind, and that is to win the NBA finals.

There’s no doubt in my mind about Jayson Taytum being an amazing player and a superstar but you can’t be great without having anything to show for it. Currently, he is averaging 23.2 ppg while shooting 37.3% from the field.

If the Celtics have any real shot at winning this title then Tatum is gonna have to step his game up, especially in the 4th quarter. Additionally, the Warriors also aren’t the clear favorites just yet, like the great Kobe Bryant once said without smiling, “there’s nothing to smile about job’s not done yet”.

Despite the fact that the Warriors are up 3-2, the Boston Celtics are going to be playing game 6 at home which is the perfect opportunity for them to even things up

Lebron James Doesn’t Feel Obligated to Speak About Every Social Issue; Opens up on What Matters the Most to Him