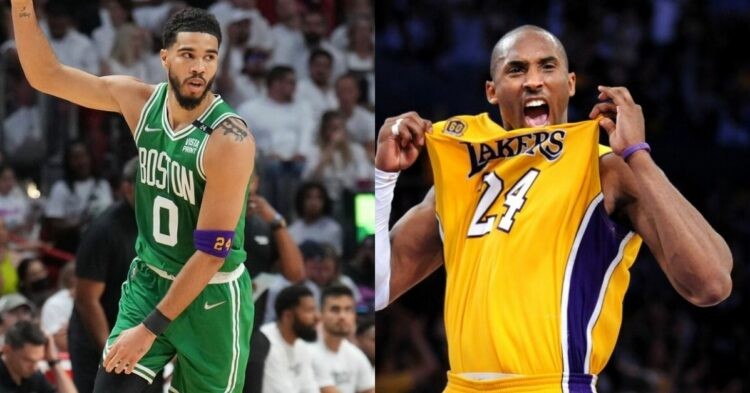 The Los Angeles Lakers and the Boston Celtics have had the oldest rivalry in NBA history. They are tied in the NBA for the most all-time titles. They have 17 NBA titles each and most of them came against each other. Boston won in game 7 of ECF against the Heat and Celtics superstar Jayson Tatum honored Lakers legend, Kobe Bryant.

Boston Celtics have turned their season around. After the all-star break, they lost just 5 games. In the playoffs, Boston swept the KD/Kyrie-led Brooklyn Nets. They then beat the reigning NBA champions, Milwaukee Bucks, in 7 games. And now against Miami, the best team in the East, they won in 7 games as well. They will now be playing the Golden State Warriors in the 2022 NBA finals.

The Los Angeles Lakers have played the Celtics in the playoffs 74 times. Boston leads the win by 43-31. But the Lakers have been able to spread their domination through the decades. The most famous rivalries were Bill Russell vs Wilt, Larry vs Magic, and Kobe vs the Boston big 4.

The Kobe vs Boston big 4 eras denied the Celtics one title and the Boston fans disliked him at the time. But after his death, everyone appreciated Kobe for everything he did on the court. Even Boston fans let go of the grudges they had.

Jayson Tatum currently leads the Celtics. However, Jayson Tatum grew up a Kobe Bryant and a LA Laker fan. He loved Kobe and was visibly broken during his tragic accident. But he kept him alive through his play. Boston has played amazingly in the playoffs and in the extremely vital game 7, Tatum was wearing a ‘Kobe Bryant-themed armband’.

Tatum scored 26 points and grabbed 10 rebounds whilst dishing out 6 assists in the win against the best of the East. He led the Celtics in scoring and was awarded the “Larry Bird Eastern Conference MVP”. He’s now on his way to the first NBA finals of his career and could lead Boston to overtake the Lakers in all-time titles.