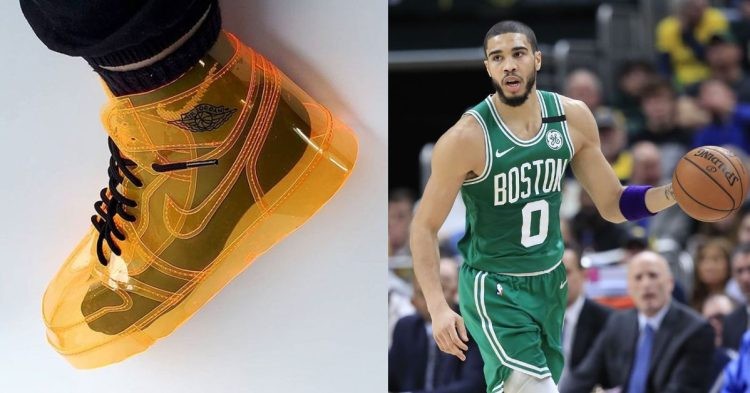 Boston Celtics star Jayson Tatum is coming off one of the best years in his career. He led the Boston Celtics to the NBA Finals for the first time in more than a decade. All NBA fans know about the Jordan Brand shoes and how they have signature athletes much like Adidas and Nike. Tatum has signed on with them and has a line of shoes set to release.

One must wonder more about the details regarding his signature shoe line. Not every NBA player is fortunate enough to be given one and we should know what Tatum’s plan is with the Jordan Brand in the future.

It would surprise many people to know that there are several players in the NBA who endorse the Jordan brand. Moreover, there are veterans like Russell Westbrook, Carmelo Anthony, and Chris Paul who have all released several versions of shoes with the brand over the years.

Notable modern-day players such as Luka Doncic and Zion Williamson also endorse the brand and have shoe lines. Jayson Tatum joins this company with the impending release of the Jordan Tatum 1. He has been in a partnership with the brand since 2019. Therefore, it is about time he got his own deal. This is also a matter of pride for his team, the Celtics.

Jayson Tatum’s first signature shoe is reported to be releasing in the summer of 2023. 👀 pic.twitter.com/1M1ZKi6udS

The Jordan Tatum 1 is expected to come out in 3 different versions, each distinguished by its color. Additionally, the name of each version also has some personal significance to the Boston Celtics superstar. “Zoo” will be released in a black metallic and gold finish. It is inspired by his son Deuce Tatum.

“Pink Lemonade” is another version set to come out based on Jayson’s favorite choice of drink. As you could have guessed, it comes with a pink tint and a lava glow aurora green. Finally, “St Louis” a tribute to his home city, is expected to come out in the white red, and blue university colors.

St Lous is expected to be released first on around April 18, 2023, followed by Pink Lemonade on June 20th, 2023, and finally Zoo on July 4th, 2023. It is still unclear if the dates are fixed. But, this is the order in which they will be released.