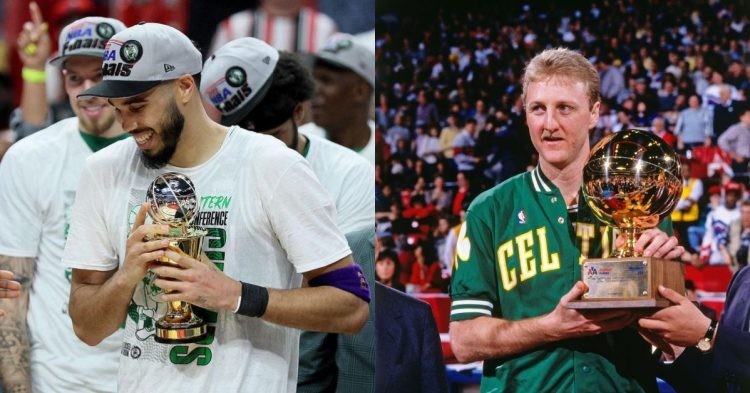 Jayson Tatum and the Boston Celtics beat the best team in the Eastern Conference, the Miami Heat in a 7 game series. They are having a great playoff run after beating Brooklyn, Milwaukee, and Miami and are now looking to continue their luck in the NBA finals. Before that took place, Jayson Tatum became the first-ever recipient of the Larry Bird eastern conference finals MVP.

The NBA revamped its entire award system on the 75th anniversary. And used it as an opportunity to honor former great players. One of them came by creating 2 conference finals MVPs. They were named the Magic Johnson WCF MVP and the Larry Bird ECF MVP. Stephen Curry and Jayson Tatum became the first players in NBA history to win those awards.

Boston we going to the finals☘️😁!! A kid from St. Louis… playing for the Celtics with chance to win a championship… dreamed of moments like this 🙏🏽

In the 1983-84 NBA season, Larry Bird won his first-ever NBA title. At the age of 27, Bird averaged 27.5 points per game, 11 rebounds, 6 assists, 2 steals, and 1.2 blocks per game in the playoffs. In that season the Celtics finished with the 3rd best defense and the 6th best offense in the league. They had a deep roster with Parish, McHale and Johnson.

However, compare this to Tatum this season. Jayson averaged 27 points per game, 7 rebounds, 6 assists, nearly 2 steals, and 1 block on his road to the finals. The 2022 Celtics are the 2nd best defensive team and the 7th best offensive team. They also had a deep roster with Brown, Horford and Smart.

The similarities are ample. And considering that Tatum won the ‘Larry Bird’ award, its safe to say it was deserving. In that season, Bird won his first title in his 1st finals appearance. And this will also be the first time that Tatum will be in the NBA finals in his young career.

Jayson Tatum put a stop the Heat with his big game 7 performance. And against the Warriors, he will be the target of their defense. Even though Tatum is Celtics player who’s a Laker fan, his goal for that series is to win. And getting Boston their 18th NBA title of all-time.