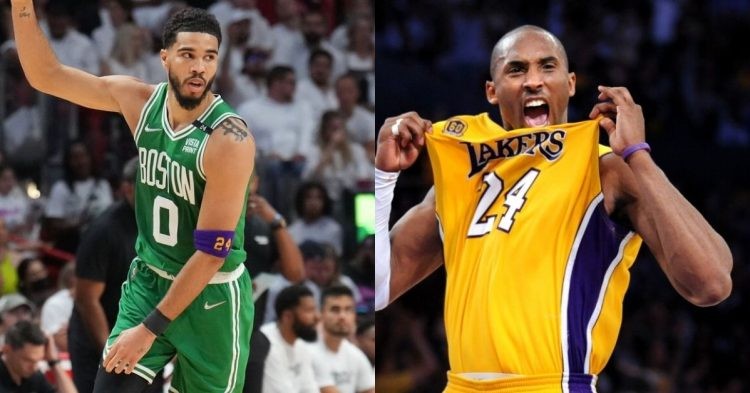 The stage is set for the NBA finals with the Golden State Warriors now taking on the Boston Celtics. The 2nd seed of the East and the 3rd seed of the West will get into a 7-game thrilling series. Boston’s road to the NBA finals has been the toughest so far. And it turns out that Kobe Bryant has been helping Jayson Tatum trample past everyone on the way.

The Boston Celtics had the greatest turnaround of this NBA season. At the all-star break, the Celtics had lost 26 games and by the end of the season, they lost just 5 more. It propelled them up to the 2nd seed and they were the hottest team in the league. They swept the Nets and took down the Bucks and Heat in 7 games. Boston is the 2nd best defensive team in the NBA and matches up well against the Warriors.

Jayson Tatum grew up a huge Kobe Bryant and Los Angeles Lakers fan. He loved the game and modeled his game around the Black Mamba. He was one of the few players in the NBA that live the mamba mentality and Kobe knew that. And he showed that by taking Tatum into private workouts and always helping him when needed.

Kobe played 20 seasons in the league and won 5 NBA titles. After retiring he even won an Oscar, the most prestigious award in the filming industry. But on January 26th, 2020, Kobe Bryant passed away in a tragic helicopter accident. It not only shook up the entire NBA but also the entire world. Jayson Tatum was one of the many that felt that pain.

In game 7 of the Eastern Conference finals, Jayson Tatum scored 26 points and grabbed 10 rebounds with 6 assists and Kobe Bryant’s armband around his hand. He honored the Mamba and after the game, he texted Kobe even though he knew he’d get no response.

It’s clear what’s motivating him and it could also be what gives him his first-ever NBA title.