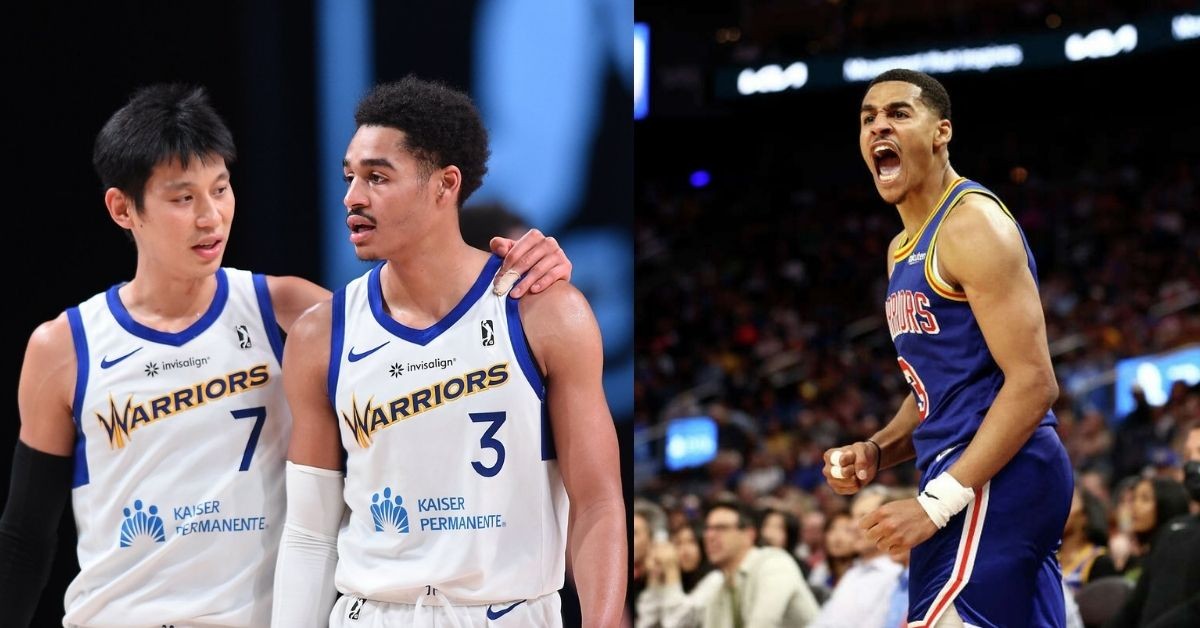 The Golden State Warriors have returned to the playoffs after a 2-year hiatus. They have their homegrown championship trio of Stephen Curry, Draymond Green, and the returning Klay Thompson firing on all cylinders. And to top it all, this season was marked by the emergence of Jordan Poole.

Poole was drafted in the 2019 NBA Draft at number 28 in the first round by the Warriors. And it was not an easy start to life in the NBA for him. In the absence of Klay Thompson and Curry only playing 5 games, Poole and the team had a rough year.

Poole averaged a mere 8.8 points and 2.4 assists in his rookie year. The lack of confidence was reflected in his shooting too, as he shot a poor 33.3% from the field. Subsequently, he was assigned to Golden State’s G-League affiliate, the Santa Cruz Warriors in the 2020-2021 season.

He turned out for the team 11 times that season, with much better performances than in the NBA. He averaged 22.4 points, 5.3 rebounds, and 3.6 assists for Santa Cruz while playing alongside former Golden State man, Jeremy Lin. And the former teammate had words of praise for Poole’s breakout season.

Lin was part of the Santa Cruz Warriors in 2021 through the NBA veterans rule, which was also dubbed the ‘Jeremy Lin rule’. He turned out for the G-League team 9 times averaging a cool 19.8 points and 6.4 assists on 50.5% shooting.

During his time there, the 2019 NBA Champion with the Toronto Raptors got to watch Jordan Poole firsthand. And Poole’s form in his third season in the NBA comes as no surprise to the veteran.

Poole not only broke into the starting lineup for the Warriors beating out Otto Porter Jr. and Damion Lee but also cemented his position despite the return of Klay Thompson. He averaged 18.5 points and 4 assists in the regular season. But more importantly, stepped up in the absence of Steph Curry.

With Curry out for the last 20 games of the season, the young guard out of Michigan led the Warriors in scoring at 25.4 points per game. He has also leveled up for the playoffs and is averaging 19.3 points and 4.8 assists while shooting at 50% from the field.

Jeremy Lin tweeted and shouted out Poole as the Warriors closed out the Grizzlies to return to the conference finals.

As Jordan Poole’s former teammate, I cant be happier for him! Great dude, great hooper. And when JP is hot and can supplement Steph/Klay’s offense, GSW is basically unguardable #GSWvsMEM

The veteran guard feels the three-guard lineup deployed by the Warriors with Poole, Curry, and Thompson would be unguardable. And that has been exactly the case. Steph and JP have shown an innate understanding of each other’s games. Moreover, they have complimented their respective offensive games well.

Steph, often double-teamed, can now afford to stay off the ball under pressure as Poole takes over ably. And can return to the fray when the youngster attracts the same pressure.

The Warriors have unearthed a diamond in the rough in Jordan Poole. He opens up a whole new future for the championship-contending team and sets them up for life without Steph Curry.