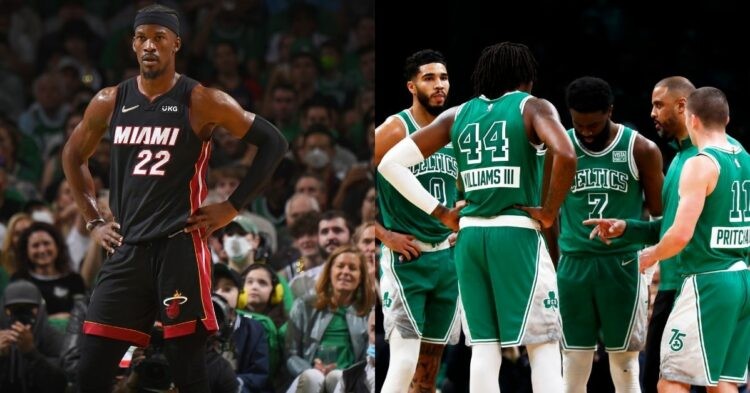 Jimmy Butler and the Miami Heat managed to win game 6 of the Eastern Conference Finals. Jayson Tatum and the Boston Celtics had a 3-2 lead on them. However, they blew this golden opportunity and lost the game 103-111.

The Heat, who were left for dead in the water after a disappointing game 5 have now forced a game 7 at home. Additionally, there is one man responsible for changing the entire playoff narrative. That man is Playoff-Jimmy.

Game 5 of any series tied at 2-2 is considered “The pivotal game 5“. Statistics and history have shown that the team that won the pivotal game 5 ended up winning the series more than 80% of the time. This is because they then have two games, one at home and one on the road to close out their opponent.

Jimmy Butler helped the Miami Heat rise from the dead

Jimmy has sent the NBA media into a frenzy. He had scored only 13 points, 6 rebounds, and 4 assists in game 5. The Heat lost at home in a disappointing 80-93 final score vs the Boston Celtics.

Jayson Tatum, Jaylen Brown, Marcus Smart, and the Celtics core were called more talented and considered the favorites by many heading into this series. This was despite the Miami Heat having the better record in the regular season.

They jumped on the Celtics bandwagon because they eliminated the Brooklyn Nets and Milwaukee Bucks. These are two teams they would have favored over the Miami Heat in terms of star power. Therefore, when JT and the Celtics took the dub in game 5, the world had this series over.

To challenge this, Butler played arguably some of the best basketball we have seen so far from him in game 6. He scored 47 points, 9 rebounds, and 8 assists in 46 minutes of playing time. He didn’t play for all of just two grand minutes in this game.

That shows how valuable Jimmy is to the Heat. He made continuous clutch plays down the very end of the game and put this game out of the Celtics’ hands. Now the pressure is on them to go on the road and replicate their game 5 performance.

Paddy Pimblett’s Next Opponent Jordan Leavitt and His Path to Victory at UFC London?