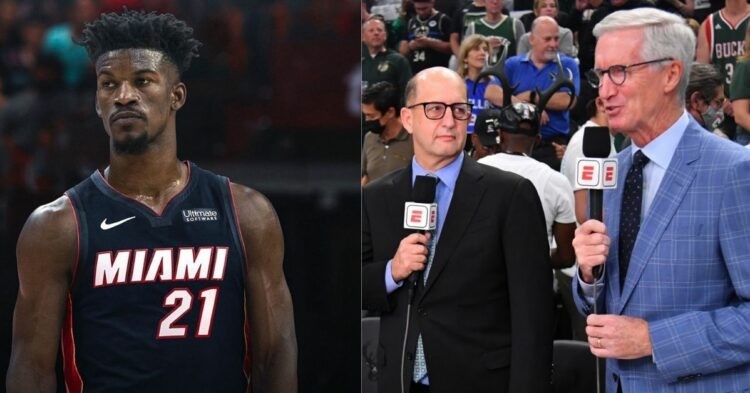 The All-NBA teams have been announced. However, apparently, Jimmy Butler didn’t make the cut. The 32-year-old has led the Miami Heat to two conference finals appearances in the past 3 years. Additionally, he helped the Heat to get the 1st seed in the Eastern Conference.

There is no other explanation for why Jimmy has not made the All-NBA team. However, Butler elevates his game during the postseason and takes it comparatively easy in the regular season. This is also why he is nicknamed “playoff-jimmy“.

Jimmy Butler has averaged around 21 points 5 rebounds and 5 assists during the regular season. This is not going to really cut it as an All-NBA player. Siakam is a touch higher than him averaging 22 points 8 rebounds and 5 assists. But is an average of a single point and 3 rebounds really all that decisive?

Butler has had a winning effect in the NBA. Many superstars have this effect. Simply explained, it is the ability to make a bad team better. However, this only becomes apparent after he has left the team. Jimmy carried the bulls, timberwolves, and 76ers further into the postseason than they had been at that point in time.

It took those teams forever to become relevant again. This is with the exception of the 76ers. The Timberwolves and Bulls have seen the postseason after a long time this year.

Perhaps, one of the important factors in deciding the All-NBA is the talent a player is surrounded by. Butler has an impressive Heat roster. It has Bam Adebayo, Tyler Herro, and Kyle Lowry. Therefore, perhaps they take away from some of his impact.

The Raptors do not have nearly as deep a roster as the Miami Heat. Therefore, it was easier to notice and acknowledge Pascal Siakam. He has been the undisputed best player on their team this season. This is why he made the All-NBA team over Butler.