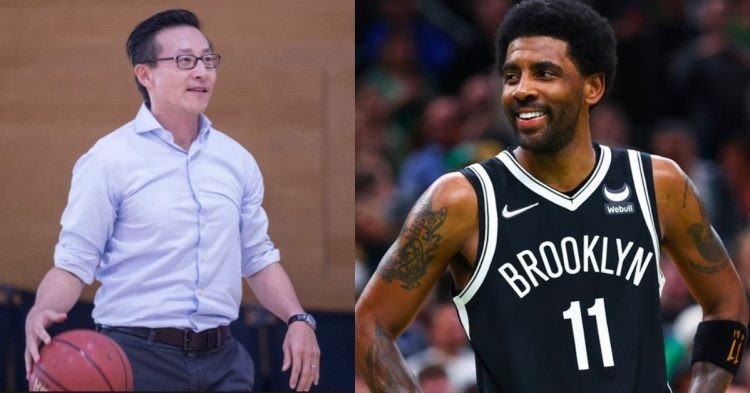 Brooklyn Nets owner Joe Tsai finally ended up meeting with his star point guard Kyrie Irving over his recent “anti-Semitic” behavior. We remember that Tsai was one of the first people to publicly call out Irving for sharing the controversial documentary.

It seems that the Brooklyn Nets decided to teach Kyrie a lesson and attempt to humble him. They suspended him for a minimum of 5 games. Additionally, they also created separate conditions for Kyrie to fulfill before him rejoining his team.

One of those conditions was to meet with Joe Tsai, who recently sent out a tweet on how the interaction went down. Fans must be extremely curious and anticipate the results of this meeting.

It seems that the Brooklyn Nets owner has been convinced that Kyrie Irving does not have an innate hatred toward Jews. That was one of the things that the documentary that he shared seemed to be promoting. Racism will simply not be tolerated regardless of the affected community. The severity of this situation caused Tsai to insist on a personal meeting with Kyrie Irving.

The Nets star must have convinced Joe Tsai that all of this was heavily being blown out of proportion. After all, this episode has been given tremendous media coverage and attention. However, we clearly don’t know what they discussed in the private meeting. Here is what Tsai tweeted out after meeting with Irving.

Clara and I met with Kyrie and his family yesterday. We spent quality time to understand each other and it’s clear to me that Kyrie does not have any beliefs of hate towards Jewish people or any group.

“Clara and I met with Kyrie and his family yesterday. We spent quality time to understand each other and it’s clear to me that Kyrie does not have any beliefs of hate towards Jewish people or any group.”

The Nets’ owner also sent out a message indicating that he was looking to move past this incident, “The Nets and Kyrie, together with the NBA and NBPA, are working constructively towards a process of forgiveness, healing, and education.”

The Nets and Kyrie, together with the NBA and NBPA, are working constructively toward a process of forgiveness, healing and education.

We are certainly happy to see the situation take this turn for the better. This incident has pulled away focus from basketball and caused nothing but drama for both Kyrie and his team. We hope he is able to satisfy the Nets’ criteria and rejoin his team. After all, they will need him to be a contender in the NBA.