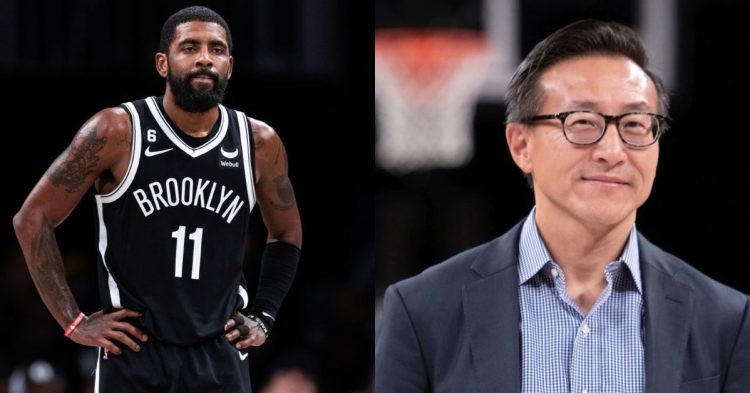 Kyrie Irving is grabbing all the headlines in the NBA world right now. As we all know, the Brooklyn Nets suspended him a few weeks ago. The reason for that would be his “anti-Semitic” views. The franchise mentioned that he will be suspended for a minimum of 5 games without pay until he takes part in measures to rectify the mistake.

Statement from the Brooklyn Nets pic.twitter.com/699px8XYpx

Kyrie‘s tweet did attract attention from the owner, Joe Tsai, who publicly condemned the player. With that said, the one-time NBA champion apologized to the world and mentioned that he will work on doing better. Despite this, Nike, the company he has been with for years, gave him the “Kanye West” treatment and suspended their relationship with Irving as well.

As of now, the NBA world is awaiting Kyrie’s return. That is mainly because it has been more than 5 games since the Nets board suspended him. However, another entity has involved him in yet another latest controversy in recent times. The Labor Organizers, an independent labor activist group, have filed a charge against the Brooklyn Nets franchise.

Are the Brooklyn Nets on the receiving end of a lawsuit for suspending Kyrie Irving?

The Labor Organizers has filed a charge with the National Labor Relations Board against the Brooklyn Nets, alleging Kyrie Irving’s suspension violated federal labor law and the league’s collective bargaining agreement

According to Top Class Actions, the charge mentions, “The Brooklyn Nets indefinite suspension of the employee is a tactic to avoid compliance with the waiver protocol. If the employer followed the waiver protocol, contract with the Nets would officially end and free agency period would begin.” It seems like The Labor Organizers have brought up the NBA’s Collective Bargaining Agreement for the charge.

As mentioned, the CBA states that the franchise should revoke a player’s contract, if the circumstance should arise. In addition to that, they claim that the same is mentioned in the uniform player contract between the franchise and the player as well.

Woj gives update on the Kyrie Irving situation.. Says that he thinks Kyrie will be back with the Nets and that it should be in the relatively near future as the Nets head back East after their game v Portland. pic.twitter.com/1jA9BtRX4j

As of now, Kyrie has not returned to court. There have been reports in the past that led many to believe that he might be back soon. There have been several updates on his return, but the franchise has not revealed when he will be stepping on the court next.