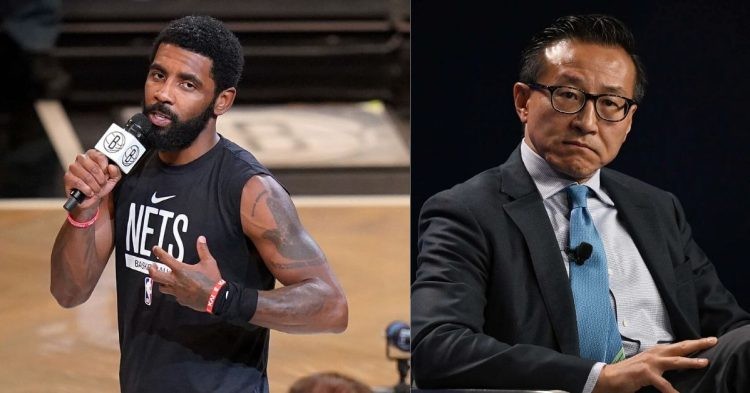 Kyrie Irving is considered to be quite an eccentric and interesting individual in addition to being a brilliant player. He has always had an interesting take on matters and shared unique perspectives depending on the context of the issue. It seems things have gotten a bit too out of hand this time.

And friendships and business partners are bigger than basketball. Sean marks and Steve nash still have a job because they’re your friends. You prioritize friendship over winning.

Brooklyn Nets owner Joe Tsai had enough. He sent out a tweet condemning Irving’s anti-semitic actions. This has the NBA world discussing the issue and taking sides. It is easy to view things as black or white. However, the truth and who is in the right are rarely so simple to deduce.

This is bigger than basketball

With all of this being said, people might want to know the context of this situation. Since the Nets owner shared his reaction to Irving on Twitter, fans who are active on the platform were the first to respond.

Kyrie Irving has always been radical in some aspects of life. His racial identity and inherent culture are some of the most important things Uncle Drew seems to believe in. He has always made posts on social media talking about the “Black Kings and Queens” as well as drawing cryptic references to Egyptian culture.

We all know that Africans were sent across the world as slaves and this creates a lot of confusion in terms of identity and religion for them. However, these are very sensitive issues for the rest of the world.

Why would you say you want to talk to him and make sure he understands that the film offends you, but tweet about it to let him know?

You’re trying to cancel him

Irving didn’t even say anything. All he did was post the link to a film on Twitter. The title, “Hebrews to Negroes: Wake up Black America” is quite controversial in itself. The sensitive nature of the title and Irving promoting it caused Joe Tsai to issue a statement.

Nope, no attempt to address the arguments of the book. As usual, just shouting down and canceling.

“I’m disappointed that Kyrie appears to support a film based on a book full of anti-semitic disinformation. I want to sit down and make sure he understands this is hurtful to all of us, and as a man of faith, it is wrong to promote hate based on race, ethnicity, or religion.”

Perhaps Kyrie should have been aware before promoting a film Tsai deems to be full of anti-semitic disinformation. However, Irving is free to use his right to speech and expression. The problem comes with each side believing the other is spreading lies.

Again I ask, did you read the book or see the film before making your statement?

The NBA world is divided in its opinions about this issue. A few attack Irving for his insensitive behavior. However, most of them are with him claiming that trying to cancel and mute Irving is definitely not the answer. Kyrie should be careful not to get on the wrong side of the Nets’ owner. After all, he is looking for a maximum contract.