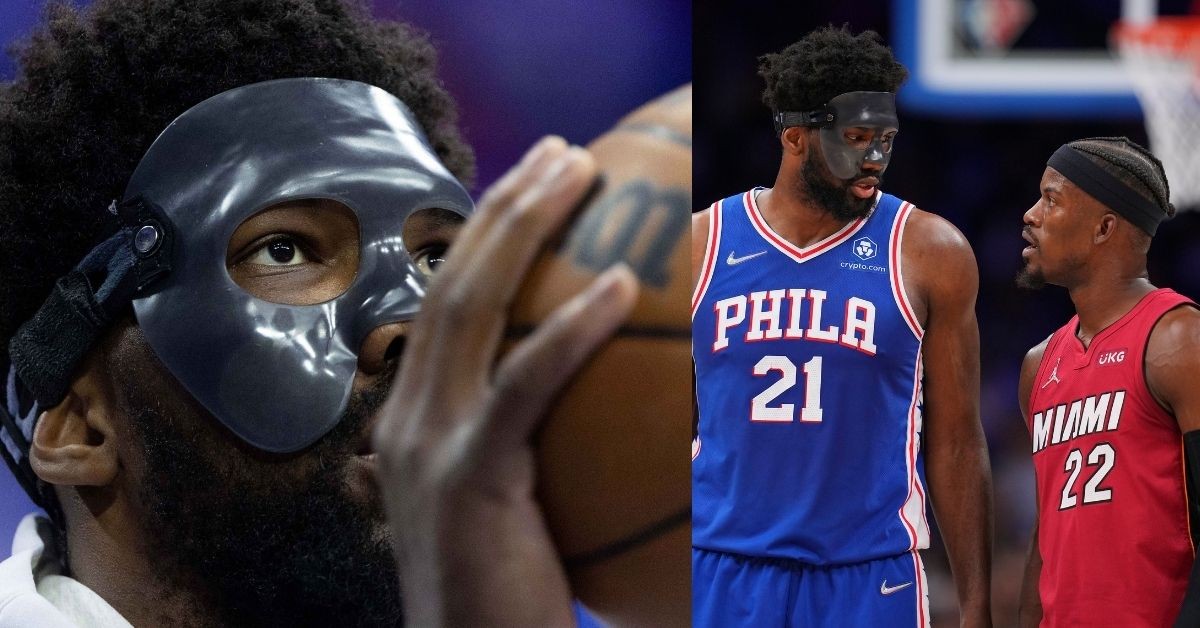 The Philadelphia 76ers have found themselves playing catch up with the Miami Heat in the Eastern Conference semifinals. They trailed the series 2-0 in the absence of Joel Embiid before tying it up again by defending their home court. But they now trail 3-2 again after the Miami Heat won decisively in Game 5.

Some of the Sixers’ troubles can be put down to Embiid’s absence due to his injury. He suffered an elbow to the face from Pascal Siakam in the series-clinching win against the Toronto Raptors in Game 6.

He has been diagnosed with a right orbital fracture and a mild concussion due to the play. Consequently, he was ruled out of the first 2 games of the Eastern Conference semifinals against the number one seed Miami Heat. He averaged 26.2 points, 11.3 rebounds, and 2.3 assists in the first-round series.

However, after his team lost 2 straight games to the Heat, he returned to the starting lineup. And he returned with a face mask on for protection since he had not fully recovered. The Sixers responded by taking Game 3 and Game 4 at home and leveling the series. But their All-Star’s struggles continued.

Although the Sixers won on his return, Embiid saw a visible downside to his numbers. And his labored performances owing to his unhealed injury are obvious to all. He has averaged 19.7 points, 9 rebounds, and 1.7 assists in the 3 games he has played this series. With a much lower return than his usual standards, it is clear that this is not the same MVP runner-up.

And his worries do not end there. Despite the face mask, contact from opposing players on his face made Embiid go down clutching his face in the Game 5 loss. The play reduced him to tears which is evidence of the painful nature of his injury.

The risk of relapse is very much a factor. Therefore, the 5-time All-Star’s decision to carry on playing is questionable. And the post-game press conference included the same question to him.

“This is a lose-lose situation for me. If I don’t play, I’d probably be called soft. If I play and I play bad, it’s that I’m not good enough.” pic.twitter.com/D7Pvg9MXX9

On being questioned, Embiid responded with his dilemma, “This is a lose-lose situation for me. If I don’t play, I’d probably be called soft. If I play and I play bad, it’s that I’m not good enough.”

And with the risk of the Sixers bowing out of the playoffs even more heightened, it is difficult to fathom him sitting Game 6 out. And you can be sure that he will give it his all once again.