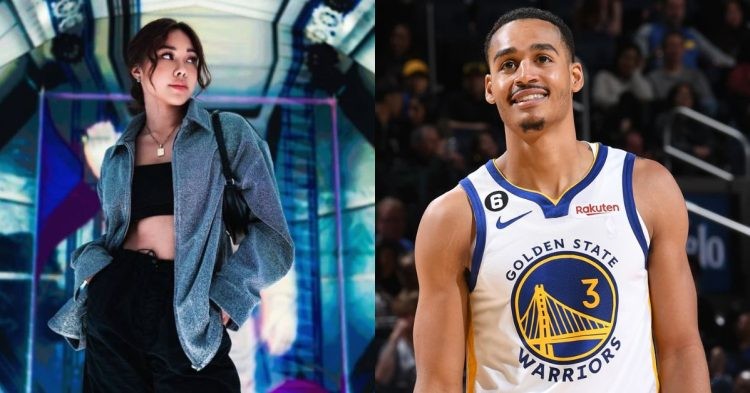 Jordan Poole is one of the best young prospects in the NBA. We could say that if he is still counted as a prospect, mainly because of the fact that he has cemented his place on the 7-time NBA champions’ roster.

The Golden State Warriors awarded him a lucrative $140 million contract, which attracted attention from fans as well. Apart from his NBA career, Poole’s dating life seems to be catching the NBA world’s eyes as well.

The young GSW player is not married currently. But the interesting fact is that he has been rumored to have dated a famous TV personality, Malika Andrews. It looks like Poole hasn’t found the one to marry just yet, judging from the rumors surrounding his dating life.

During the 2022 NBA Finals, Poole’s girlfriend was reported to be Instagram model Kim Cruz. It looks like it started when she posted a video of Poole at a game on October 13th, 2021. After seeing the Instagram post, many speculated that this could be a sign that the pair were dating.

That night, the Warriors played against the Oklahoma City Thunder. Jordan started that game for the team and he put up 14 points on the board, together with 4 assists and 3 rebounds. It seems like a special someone’s support at the game may have helped Poole after all. Although the video she posted was quite generic, one of them included Poole taking a free throw on the court. This was what started the media frenzy.

That wasn’t the only time when Kim Cruz attended a GSW game. On her Instagram story highlights, Cruz has posted images and videos at the Chase Arena. It looks like the Warriors-Clippers game wasn’t the only one she attended to support Jordan Poole. Many may claim that she could simply be a Warriors fan.

But when she attends numerous games and posts a video of Poole directly, a player she is rumored to be with, it does fuel the rumors.

Apart from Kim Cruz, it seems like Hollywood star Zendaya also caught Poole’s eyes. Apart from in the NBA, the young player shoots shots off the court as well. For those who don’t know, Klay Thompson was in a relationship with Laura Harrier, who starred in Marvel’s Spiderman movies which had Tom Holland in the lead roles. The couple was quite public about their relationship back then.

However, Jordan decided to shoot his shot at another Spiderman movie star, Zendaya. She is also well-known for her roles in various movies and TV shows over the years. When Klay’s then-girlfriend Laura shared an image of the couple, Poole saw that as an opportunity. When Zendaya commented an emoji under her co-star’s image, Jordan tagged the Euphoria star, together with Klay. He asked, “Double date?”

Can’t blame Jordan Poole for shooting his shot with Zendaya 😂

It is quite evident that Poole’s crush was quite secret, mainly because he doesn’t follow Zendaya on Instagram. One might think that he didn’t want the world to know that he was willing to shoot his shot at the Hollywood actress. As for Kim Cruz, Poole follows her on the platform, which might just fuel their dating rumors even more.