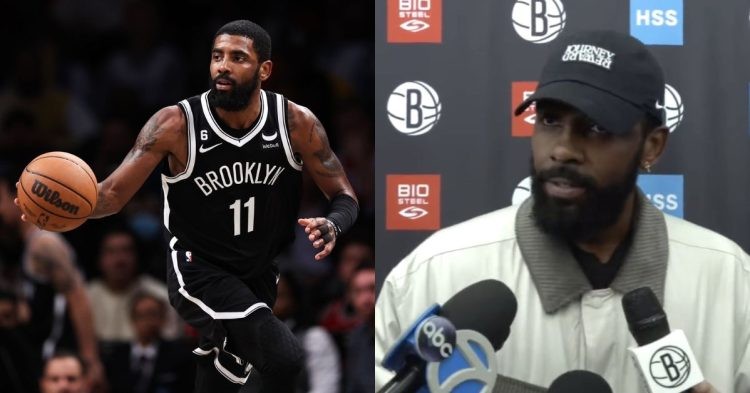 Kyrie Irving is at the center of all our attention currently. The entire NBA community is looking at him right now because of his recent controversy. For context, Kyrie posted a tweet about a movie that promoted anti-Semitic remarks. Since then, Irving has faced the wrath of fans, the NBA commissioner Adam Silver, and Brooklyn Nets owner Joe Tsai, who suspended him earlier today.

However, right after the suspension, Kyrie took to Instagram to issue a public apology for the hurt he has caused the community. Many may wonder what prompted the Nets to suspend him. The main reason for that would be his speech yesterday, where he directly took a shot against the media.

During the interview, the media asked Kyrie to clarify the situation. He said, “I’m just proud of my heritage and what we’ve been through. The fact that this has pinned me against the Jewish community, and I’m here answering questions whether or not I’m sorry on something I didn’t create.”

“I’m a beacon of light. I’m not afraid of these mics, these cameras. Any label you put on me I’m able to dismiss because I study. I know the Oxford dictionary.”

Kyrie Irving with a lengthy answer on the public reaction to his sharing of an anti-Semitic film on social media: pic.twitter.com/JgG9hOFQiU

The Nets guard also mentioned that he is a victim of double standards displayed by the media. “Please keep that same energy when we talk about anti-other things. Just because I posted that documentary doesn’t mean I’m anti-Semitic…I’m glad that I could stand on the truth. I’m not afraid of these mics, these cameras, I used to be, looking everyone in the eye and telling the truth, that I’m proud of who I am,” Irving added.

For context, the Nets star feels like the media has targeted him. To make matters worse, it was for something that he did not intend to do, according to the 30-year-old. Kyrie admits that he was only trying to support his heritage and not spread hate toward anyone else.

Kyrie’s lengthy explanation of the situation attracted much attention from NBA fans, who tweeted their reactions. Most of the users have taken a shot at Kyrie for the way he expressed his opinions.

“Where were you?” YOU, @KyrieIrving, posted the link. No one would be questioning your beliefs had you not. You’re not the victim. You’re not a martyr. You’re just exposing yourself again as confused & misinformed pic.twitter.com/WHFo5DrnLb

This is incredible. Three and a half minutes and not a single thing he said made any sense. The king of word salad.

Very simple. I’m sorry offending Jewish people, that was not my intention pic.twitter.com/MVquWnBKfA

The majority of the fanbase has decided to call Kyrie out for not admitting that he was wrong. A fan even said, “Kyrie gonna retire from the NBA before he admits he was wrong for promoting hate toward a mass group of people.”

However, on the other hand, some of the fans have displayed their support for the former Cleveland Cavaliers star.

He has no history of having a problem with the Jewish community, and he played for COACH K! When journalists get lazy, they stir up the melting pot and pour out the sickest narratives that has no roots whatsoever

Fans often compare Kyrie’s situation to Kanye West’s. For those who don’t know, the American rapper has been facing plenty of backlashes recently for the same, where he promoted anti-Semitism. And just like Kyrie, many believe that he refused to apologize. That was until today when Kyrie made it clear that he made a mistake. Adding on to that, he also mentioned that this will be a learning experience for him.