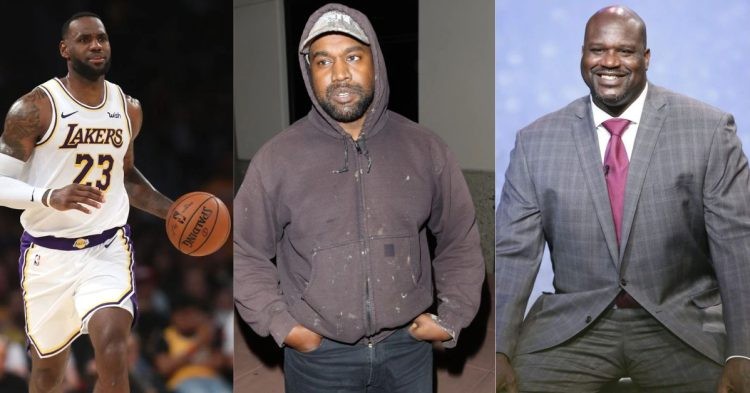 LeBron James on the court, Kanye West wearing a hoodie and Shaquille O'Neal in a suit (Credit: Twitter)

Kanye West just accused LeBron James, Shaquille O’Neal, and several others of being controlled by certain higher powers and unseen forces. Fans must certainly be aware of Ye’s recent controversial statements and the reactions the world had to them. He lost multiple endorsement deals and even had his net worth reduced drastically from over $1 billion to only around $400 million this year.

Despite all of these consequences, West has not laid off the scandalous statements and accusations. He recently called out LeBron, Shaq, and several other popular NBA players and celebrities. Although he is losing credibility fast, especially in the public eye, we should still take a look at what Kanye West had to say and how much truth there could be to it.

Kanye West claims that even LeBron James is being controlled

Over the past few months or even years, West’s relationship with the media and paparazzi has steadily deteriorated. In fact, he even revealed that they played a huge role in his taking medication in the first place. For those who do not know, Kanye was diagnosed with bipolar disorder a few years ago.

However, that has not stopped him from making a point that he feels to be extremely valid. Ye claimed that all sorts of celebrities with the exception of himself are being controlled by higher forces. He even stated that whenever er someone of prominence ever spoke out against the higher-ups, they always ended up missing and dead.

Quite the controversial take from Ye. He is claiming that NBA stars like LeBron James and others have to stay silent on certain issues. If they do not, something mysterious happens and a loved one could even end up dead. He even brought up mysterious deaths that surrounded several prominent actors, athletes, and rappers to draw legitimacy to his point.

Kanye concluded by claiming that even though he lost a lot of money recently, he is still being protected thanks to God’s grace and that he would continue speaking out against these “hidden powers.”