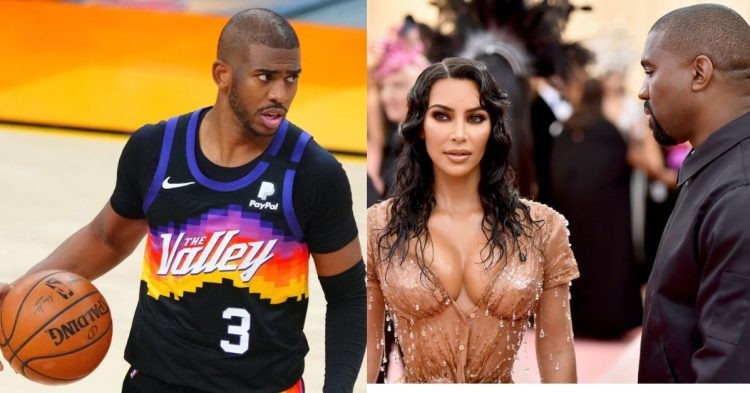 Chris Paul on the court and Kanye West with Kim Kardashian (Credit: Twitter)

It turns out that other people might have known that Kim Kardashian had an affair with Chris Paul. Most of us are already familiar that Kanye West recently accused the Phoneix Suns star of having an affair with Kim. This accusation came out of the blue and caught the NBA world off guard.

This news disturbed a lot of fans as CP3 is well known to be a family man and even has 2 children. Not knowing whether these accusations are legitimate or not has caused a lot of confusion.

It would surprise many NBA fans to know that another celebrity might have known about this and even indicated so to an audience. If this affair happened many years ago, it is possible these clues slipped completely over our heads. Therefore, we need to know who this celebrity is and what hints they gave us about this affair.

Some of us might already be aware that Drake and Kanye West have called out and dissed each other in their respective albums. When Drake released an album called “Certified Lover Boy“, he and his friends were all seen wearing various Chris Paul Jerseys from his time with New Orleans and Phoenix.

Drake was playing mind games the whole time with Kanye back when when CLB was dropping? Had all the homies in a Chris Paul Jersey while he was beefing with Kanye. Damn https://t.co/Xpd6rji7Yg

This made no sense at the time. However, the reference makes more sense now that we know Kanye’s ex-wife has been accused of sleeping with Chris Paul. Nonetheless, we think it is important to explain to fans that this is nothing more than rumors and fan theories.

It would also be shocking if Drake even knew about it. After all, since both Chris Paul and Kim Kardashian have partners, they would have kept it out of the public eye. If an affair even happened in the first place. None of us are able to figure out how Drake even found out.

Kanye West and Drake were at odds at the time. Therefore, now fans are claiming that his wearing CP3’s jersey was a brilliant form of psychological warfare. Chris Paul should probably release an official statement on this issue. That will allow people to finally move on from this incident.