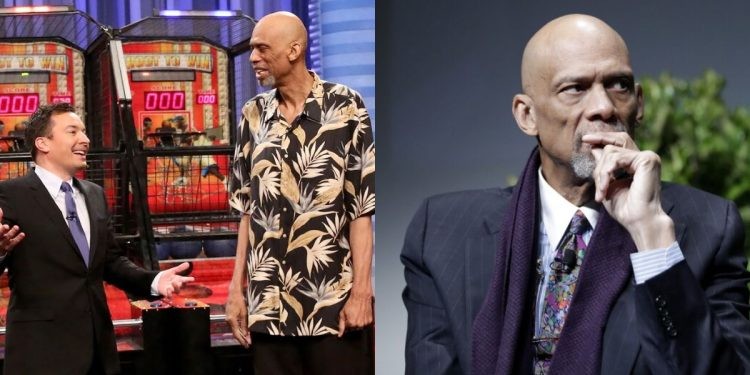 Kareem Abdul Jabbar is one of the greatest NBA players we have ever seen. He is often one of the outsiders looking into the “GOAT” conversation between LeBron James and Michael Jordan. Kareem holds the record for most points ever scored in the NBA (38,387).

He was invited as a guest on “The Tonight Show Starring Jimmy Fallon“. This is an entertainment show, in which the host, Jimmy, invites and interviews well-known personalities across the country or even the world. Fallon asked Jabbar who he thought was the greatest player of all time between Michael Jordan, LeBron James, and himself. Kareem’s answer was truly hilarious.

The discussion regarding the greatest player of all time never seems to grow dull. Many of the NBA greats have been asked to share their input or opinion on who had the best case. It may surprise people to know that Kareem is next on the list for most analysts, next to LeBron James and Michael Jordan.

One’s accolades should speak for oneself. He is the record holder for most points in the league. Additionally, this record has been untouched for almost 40 years. Moreover, Jabbar is also a 6 time NBA Champion. He won 1 championship with the Milwaukee Bucks. Kareem was an integral part of the “Showtime Lakers” and paired with Magic Johnson to win 5 more championships. Therefore, he is someone qualified to discuss the subject.

When asked about who he thought was the GOAT, his answer was dripping with sarcasm and wit. Perhaps, he had been asked this question before. Therefore, he could have very well planned what he was about to say in advance.

“I’ll answer, The GOAT committee meets in secret… so that’s just something we’re not going to know about But if LeBron breaks my record in this next year coming up that will be one last record that I won’t have to worry about ever again“.

Kareem skillfully evaded answering the question head-on. Moreover, he chose to mock the constant debate by pretending there is such a thing as a “GOAT Committee” that meets in secret to discuss these issues.

He did not follow up and chose who is the best player. Therefore, only inferences can be made that he believes LeBron will take the number 1 spot if he surpasses the record next season.