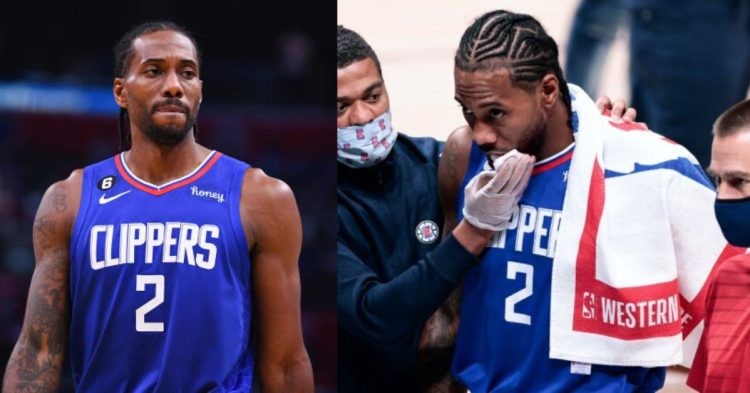 Kawhi Leonard on the court and being taken care off by Los Angeles Clippers staff (Credit: Twitter)

Kawhi Leonard took his talents to the Los Angeles Clippers to help the franchise contend for an NBA title. However, he seems to be injury-prone and is not looking like himself. Especially after suffering an ACL tear all the way back during the 2021 playoffs.

He did not play the entire 2021-2022 NBA season and chose to rehabilitate and recover from this serious injury. Despite taking an adequate amount of rest, the LA Clippers star played in only 2 games this season. One should wonder what could be wrong with him and when it will get better. Things look grim for the fan base as we now have an injury update on Leonard.

What happened to Kawhi Leonard?

This is not the first time Kawhi has been injured in his career. He sat out for almost two seasons with the San Antonio Spurs after being injured in the playoffs. He recovered and managed to win the 2019 NBA title with the Toronto Raptors. However, he is yet to lead the Los Angeles Clippers to a coveted championship.

In the two games he played this season, Kawhi scored 14 points against the Los Angeles Lakers and 11 points against the Phoenix Suns. He hasn’t played a single minute of the last 8 games for the Clippers. He has cited Knee soreness and management as the reason for not playing.

This is still early into the NBA season. The Clippers would be better off sitting Kawhi for a while hoping that he makes a full recovery. Their coach Tyron Lue discussed how the team is handling this situation in an interview recently.

“There’s really not a time frame of when he is going to be back. The biggest thing is just the testing that he has to go through with the medical and the slow progression of just getting better every single day. And so we’re just taking it day by day right now, not really a timetable.”

An NBA season is 82 regular season games long. Despite being in his 4th season for the Clippers, Leonard has played in just 111 games. We hope he is able to get completely healthy and return to the court as soon as possible.