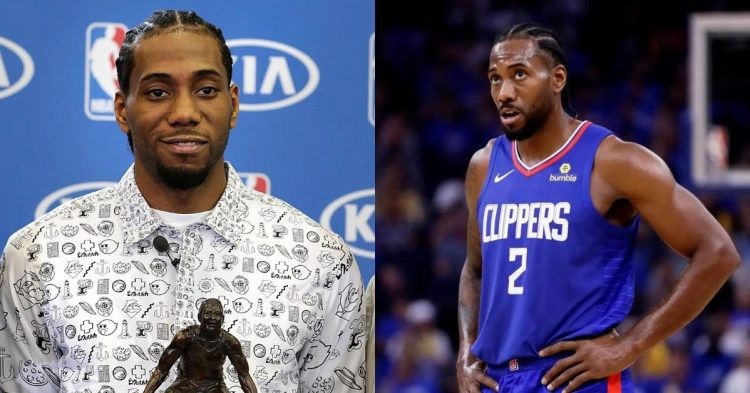 Kawhi Leonard is without a doubt one of the most dominant players in basketball when he’s active. He and the 2014 Spurs played a massive role in LeBron’s departure from Miami. Kawhi beat LeBron’s heat in the finals that year and even took home the Finals MVP.

Leonard then led the Raptors over the Warriors in 2019 for his second ring and Finals MVP. The Warriors may have been injured but that doesn’t take anything away from this man’s greatness.

When you do great things on the court, you make even greater money off the court. Let’s look at Kawhi’s NBA contract, salary details, and endorsement deals.

How much money does Kawhi Leonard make with the Los Angeles Clippers?

Kawhi Leonard has signed a 4 year $176.3 million deal to return to the Los Angeles Clippers.

Throughout his 11-year NBA career, The Klaw has made around $188,433,635 in NBA salary. Let’s have a close look at what Kawhi has made these past few years.

Kawhi Leonard has a net worth of around $25M and he was featured on the World’s Top 50 Highest-Paid Athletes list in 2021. Kawhi currently has 2 years left on his contract with the Clippers. His contract will expire after the 2024-25 season after which Kawhi will probably be signed to a crazy contract in the neighborhood of $180M-200M.

Now when we talk about endorsements outside of shoe deals you will be shocked to hear that Kawhi doesn’t have a lot of them, and since it’s Kawhi we’re talking about this is probably by choice.

Of course, all of this assumes that Kawhi will be able to stay healthy and play some good basketball.