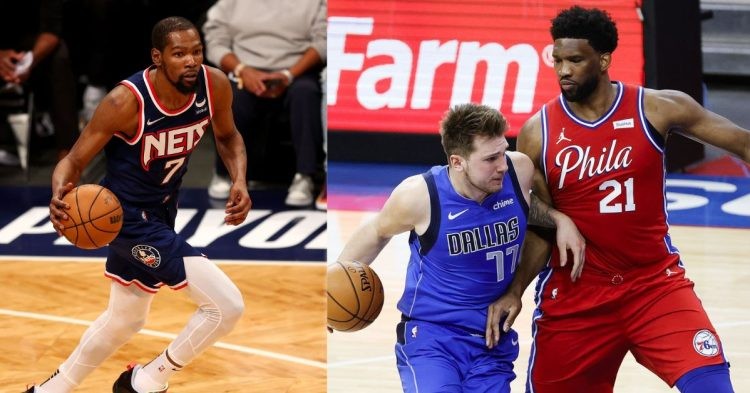 Did the NBA choose Luka Doncic over Kevin Durant? Fans might be aware that the league has several awards to be distributed throughout the regular season. The NBA player of the month, among many others, is an award given to one player from each conference.

As we all know, Luka Doncic has been on an unreal scoring rampage. He has scored 50 or more points thrice over a 5 game span. This is something we have never heard of in the league’s history. As a result of this elite play, Doncic was awarded the NBA Player of the month for December.

The Kia NBA Players of the Month for December! #KiaPOTM

While many would definitely agree that Luka deserves it, a select few feel that Kevin Durant deserves to win just as much. Let us take a look at what these fans feel and the legitimacy behind it.

Joel Embiid was selected alongside Luka Doncic instead of Kevin Durant

It turns out that Luka Doncic is not the player who experts chose over Kevin Durant. Although it is accurate to say that Doncic is better at the current moment. Nonetheless, since KD is with the Brooklyn Nets in the Eastern Conference, the player who was chosen over him is Joel Embiid.


Considering that this award is for their play in the month of December, some fans are stunned to find out that Joel Embiid was chosen over Kevin Durant. Embiid is averaging 35.4 points, 9.9 rebounds, and 4.2 assists. His team held a record of 9 wins and 4 losses throughout December.

On the other hand, KD was averaging 28.3 points, 7.5 rebounds, and 5.3 assists in December. However, as fans pointed out, “KD robbed once again” he made an incredibly efficient 60% of his shots throughout the month. Moreover, his team clearly did better in that span and lost only once.

Having a winning impact on the team is certainly more important than scoring points. Fans think KD gets no love from the media. However, this would truly be offensive to Joel Embiid who is averaging significantly higher points and rebounds. He is also quite close to Durant in terms of assists.

kd robbed 😂 his team lost once all month

Thus, it looks like Joel Embiid and Luka Doncic were the best players of the last month in 2022. Thankfully for players like Kevin Durant, these kinds of awards are meaningless when compared to a coveted NBA championship.