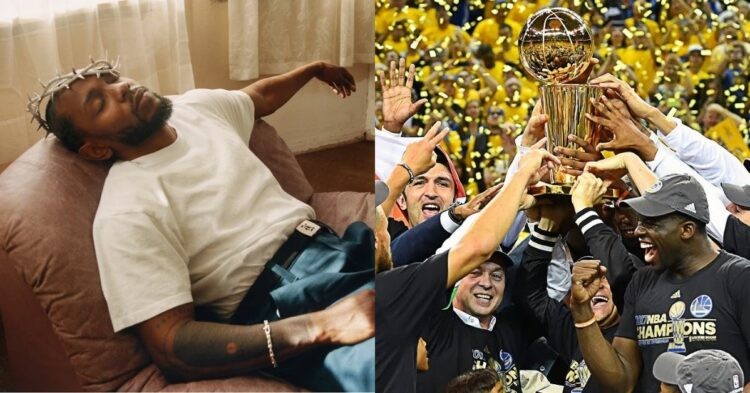 The Golden State Warriors are the most recent dynasty in NBA history. They won 3 titles in 5 straight NBA finals appearances but then hit rock bottom. This season they are back to the NBA finals after a 2-year drought and could win it because of world-class rapper Kendrick Lamar. Lamar is taking up all the headlines with his newest album ‘Mr. Morale & the Big Steppers’.

Kendrick Lamar has 48 Million monthly listeners bumped up massively after his new album dropped. All the songs on the album made the Billboard top 100 list including 13 of them in the top 40. It was pure dominance and has been doing this for years now. A lot of NBA players including LeBron James showed a ton of good reception to the album.

Official Numbers for Kendrick Lamar ‘Mr. Morale & The Big Steppers’ is 295K first week. It is his 4th #1 on the Billboard 200 chart.

It’s weirdly coincidental that they coincided at the same time. With the Golden State Warriors now in the NBA finals and a Kendrick Lamar album recently released, could we see this streak continue? To imagine that a rapper has so much effect on the success of a franchise is wild. That too, without being on the court.

Kendrick Lamar is Los Angeles Lakers fan but he is surely a fan favorite in the Warriors franchise after this stat surfaced. With the Warriors now taking on arch-rivals of the Lakers in the NBA finals, Lamar will be hoping that this streak does not break.

The Boston Celtics’ road to the finals has been a lot more difficult than that of the Warriors. They have beaten legitimate title contenders in the Nets, Bucks and Heat and now take on the GSW. The Warriors are the best defensive team in the league but the Celtics are the hottest team in the league. Will the experience and weird stats help the Warriors win?