Kevin Durant and Rihanna : The 2017 Rivalry That No One Will Forget 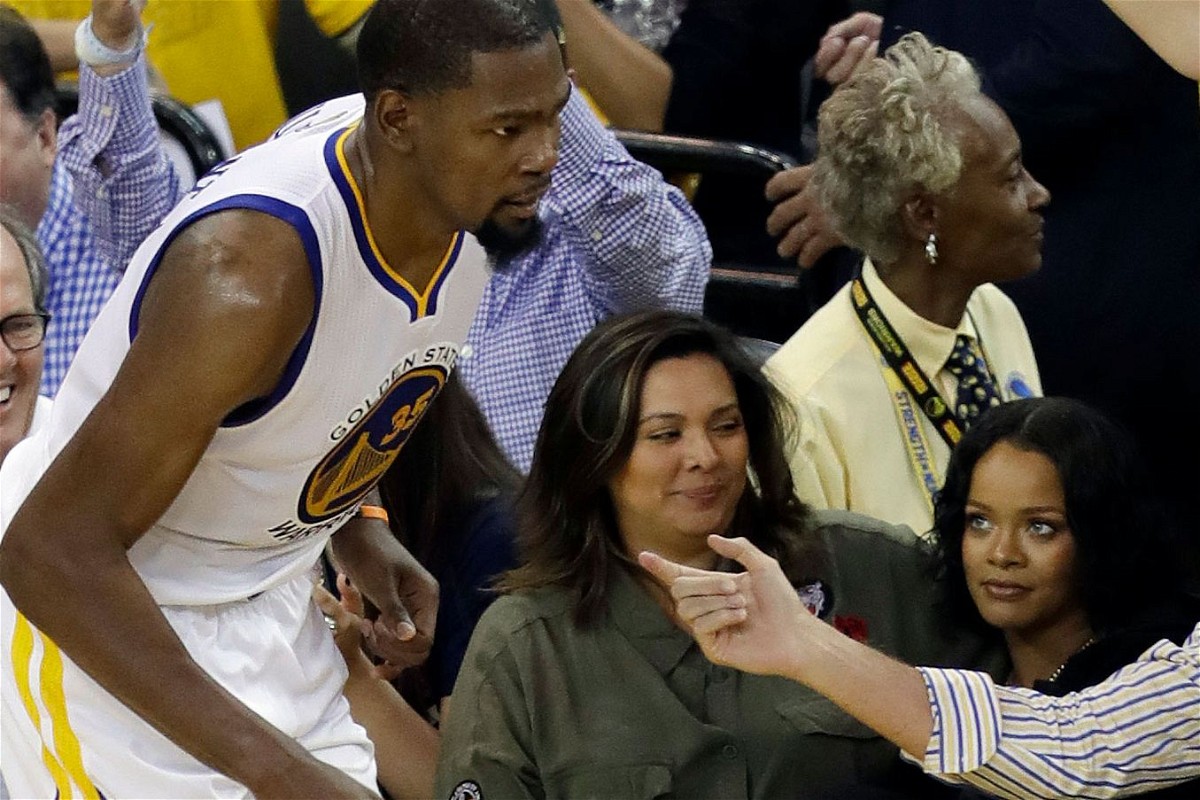 2017, a year the Golden State Warriors would love to remember. They had taken home a championship after beating the Cleveland Cavaliers. The rivalry between Stephen Curry and LeBron James was one of the most anticipated rivalries that season. However there was one other rivalry that stood out and it was between the 2017 Finals MVP, Kevin Durant and the Bad Girl, Rihanna.

What Happened in the 2017 NBA Finals Between Rihanna and Kevin Durant?

Game 1 of the 2017 NBA Finals between the Golden State Warriors and the Cleveland Cavaliers saw Steph and co take a huge win but the highlight of that game came in the fourth quarter. Rihanna has always been a fan of LeBron James and to her, he is the King. The singer made it clear that she was there to root for James. She bowed down to the king and threw up the dab right after LeBron pulled off an impressive defensive play

She was also heard yelling ‘Brick’ at Kevin Durant when he was on the free-throw line. This banter triggered Kevin Durant to stare her down and that is when the two began exchanging stares.

Right after that, Kevin Durant pulled up for a three-pointer right in front of bad girl RiRi and stared her down. The exchanges between these two stars went viral on social media

The Reaction After The Warriors Victory

Right after the victory in Game 1, KD did not take the opportunity to show off the mic drop moment he had. Instead, the Finals MVP just played it cool and claimed he did not even remember the incident.

Reporter: "…you looked towards the crowd towards Rihanna. Was that on purpose?"

While Kevin Durant was playing it cool, Rihanna stood by her King. She made it clear that she was going to remain a loyal fan of LeBron James.

Kevin Durant And Rihanna Clear The Air On Instagram

While everyone believed that Rihanna and Kevin Durant are sworn enemies, the two stars have cleared the air that it’s all in fun and games and that there is no hate. When Kevin Durant tested positive for Covid-19, He joined a live by DJ Spade and engaged in a conversation with none other than Rihanna and Drake.

The singer and The NBA star entered into a back and forth joke-off and teased each other on the live.

Is KD allowed in here? Should I wear a mask to live? But foreal get well soon, KD.”

Yo Robyn didn’t u just come from Europe?

Other Celebrities Who Love To Trash Talk From The Sidelines

The rivalry between Rihanna and Kevin Durant is not the first incident. There have been several occasions where celebrities have trash-talked players from the sidelines

For instance, we all remember the time Kevin Hart went up against Dwayne Wade. The comedian did everything he could from the sidelines to help his team the 76ers to win. He was seen yelling at all the Miami stars on the court especially D-Wade.

Another Instance is the one between Drake and The Golden State Warriors. The 2019 season was historic for the Toronto Raptors and Drake was one happy Fan.

He first picked on Draymond Green when he was seen calling Draymond Trash.

Although these rivalries happen in Good Faith, they are surely entertaining for fans to witness