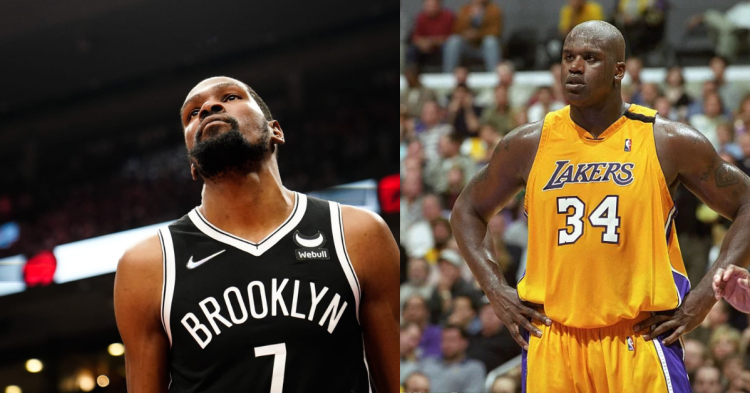 Ever since Shaq retired and got into media he’s made a living out of making bold statements that tick people off. You can usually find him on Instagram going at it with Rudy Gobert. Recently after game 4 of the NBA finals, Shaq made another one of these statements.

He said that his Lakers would beat the 2017 Warriors and MJ’s Bulls and Kevin Durant was there to clap back at Shaquille O’Neal.

KD: “Bring Shaq up in that pick and roll and test them hips. Pause.”

Shaq: “Every time you miss you know what ima do, post you and score. I don’t have to stop anyone I have to be stopped which is impossible to do.” pic.twitter.com/1klsQ7dRnZ

Would Shaq’s Lakers be able to beat either of the teams in question?

Now, Shaq’s Lakers were an absolute force during their time. But, they didn’t have nearly enough firepower to take on MJ’s Bulls or the 2017 Warriors. With four all-stars and two MVPs, the Warriors had the firepower to outscore the Lakers on any given night.

Shaq was the main driving force of that offense and he couldn’t hit a 3 to save his life. While, on the other hand, the Warrior’s played with two of the best shooters of all time along with KD who averages a decent 38% from three.

Furthermore, MJ’s Bulls included probably the greatest player of all time, Michael Jordan, Scottie Pippen, a defensive powerhouse, and Dennis Rodman. Shaq’s Lakers are undoubtedly the weakest of the three teams in question, followed by MJ’s Bulls and the 2017 Warriors. They may have been great but in a seven-game series, they have no chance against the other two teams.

Kevin Durant may have clapped back against Shaq’s comments but if he is going to continue making such comments he needs to step his game up. A young Celtic team swept KD and the Nets within the first round of the 2022 playoffs. KD averaged 26 points on good shooting percentages, but that doesn’t excuse him from the fact that he let his team get swept in the first round of the Playoffs.

It’ll be interesting to see what the Brooklyn Nets will do in the offseason to set themselves up for the 2022-23 season.

Brendan Allen’s Wife, Kids and Family – Here’s Everything You Need to Know