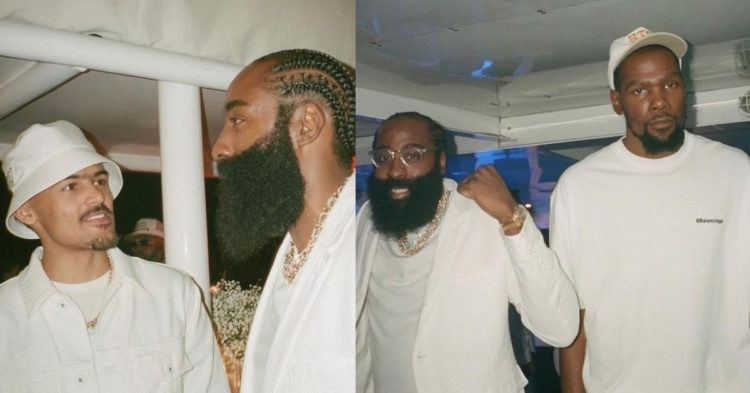 Philadelphia 76ers star James Harden celebrated his 33rd birthday on August 26th. The Beard has had quite an illustrious career in the NBA despite not having won a title yet. He celebrated with his close friends and fellow NBA players. Several stars attended the yacht party including Kevin Durant and Trae Young.

Kevin Durant and Trae Young were spotted at James Harden’s yacht party for his birthday 📸 pic.twitter.com/nKWTGc9UER

As you can tell from the majority of the pictures, the theme of the event seemed to be a white dress code. All the NBA stars adhered to it and enjoyed themselves.

Veteran NBA fans will know that Durant and Harden go way back as both teammates and friends. They were part of the Oklahoma City Thunder alongside Russell Westbrook and Serge Ibaka. However, Harden soon left OKC and was traded to the Houston Rockets, while Durant made his way to Golden State a few years later.

Both NBA superstars briefly united again with the Brooklyn Nets. Be that as it may, Harden soon requested a trade midway through the season and was traded to the Philadelphia 76ers in return for Ben Simmons. NBA analysts thought Kyrie Irving not taking the vaccine and KD being injured were the biggest reasons why Harden was traded. Moreover, there was evidence to prove that Durant was not on good terms with Harden after the trade went through.

It seems that it was all in the past. Kevin was a part of the celebrations alongside Trae Young and several others at the Yacht party. Most importantly, he got to get away from the drama of his trade request this offseason for a while. The stories and posts shared by guests at the party show the good time Harden was having.

The Beard threw a cake into the ocean in a form of celebration. Additionally, he was presented with an ice sculpture made in his image. It was placed behind the tequila bar inside the yacht.

There are few people on this planet who can afford to throw the type of party Harden did. Additionally, he did it on a supersized yacht with the people closest to him. We are glad Kevin Durant got the invite considering their history.