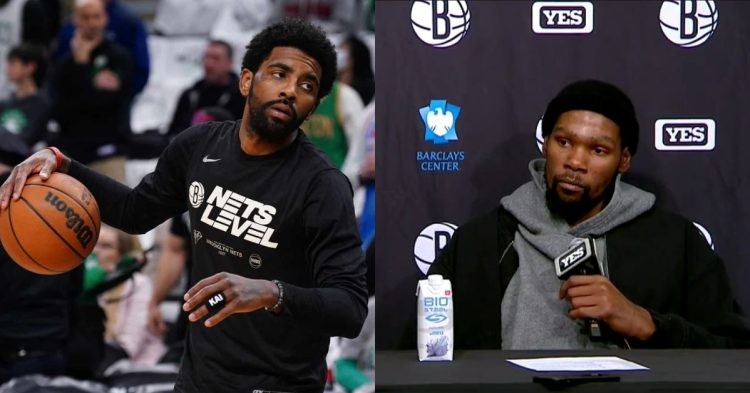 Kyrie Irving is a sensationally talented basketball player. However, his behavior seems to be earning him a bad reputation in the eyes of the media. As a result, his teammate and close friend Kevin Durant recently spoke out on the latest controversy surrounding Irving.

Some of us might have already heard about what happened. Kyrie shared a video about a film titled, “Hebrews to Negroes: Wake up Black America”. This film is based on a book that Brooklyn Nets owner Joe Tsai condemned as anti-Semitic. He was one of the first people to draw attention to and condemn Irving’s actions.

Durant, Irving, and the Nets are currently having a slow start in the NBA season. With a record of 1-5 and an uphill battle ahead of him, KD was asked about Irving’s actions and how he felt about them. He snapped back with a response that should make us introspect about the very state of the world itself.

The history of Jews is a sensitive topic that not many people are familiar with. There are some theories that the black slaves were forced to convert to Christianity while a select few chose to become Jews. The book itself was considered quite controversial in nature. Additionally, there are claims that it attempts to promote racial hatred.

The facts of this situation are quite amusing in a manner of speaking. Kyrie shared something that can be considered controversial. To the extent that Nets owner Joe Tsai issued a stern warning. However, by doing so in a public forum, the media exposure and attention give the post the publicity Tsai and some people feel it does not deserve.

None of this has anything to do with Kevin Durant or the world of basketball. He knows better than most people what Irving is truly like. Therefore, he responded to the media trying to ignite the situation by asking if this situation was causing problems in the team with a brusque reply.

“Absolutely not. it only impacted you guys and everybody outside the locker room.”

Nick Friedell: “Do you think anything that’s gone on with Kyrie recently with what he posted and backlash he’s faced from it has impacted the group at all?”

Kevin Durant: “Absolutely not. Only impacted you guys and everybody outside the locker room.” pic.twitter.com/TZM0Q0zmIN

Perhaps KD is telling the truth. People are undoubtedly sensitive to their racial and religious identities. However, considering that the Nets have much bigger problems, it is likely this truly isn’t a matter of focus for the teammates at all. After all, they must be used to Irving after all these years.

Jerry West, the Player on the NBA Logo Was More Happy When Fans Didn’t Know About the Origin of the NBA Symbol

Who Is the Player on the NBA Logo: Designer Alan Siegel Gives Some Interesting Details About Its History and Origin