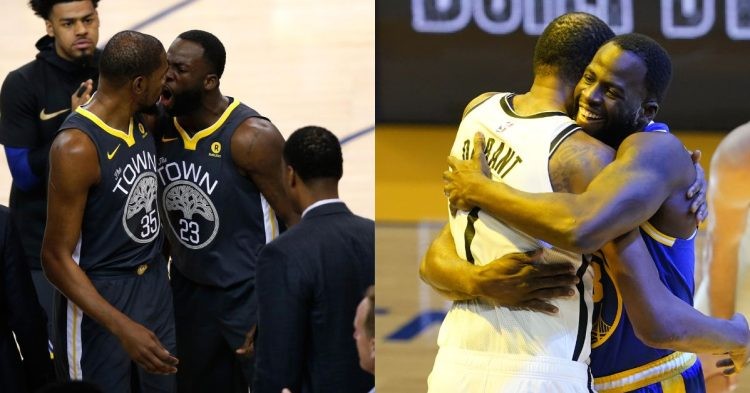 Winning games helps strengthen team chemistry but winning NBA titles build a brotherhood. The Golden State Warriors are the core of such relationships. Stephen Curry, Klay Thompson, and Draymond Green, along with Kevin Durant, brought forth a winning mentality to the bay. Yet, the narrative has forced some of these players to turn on each other.

“You’re a bitch and you know you’re a bitch. We don’t need you. We won without you. Leave” what Draymond Green told Kevin Durant during heated exchange
https://t.co/I7khLFmZl6

KD and Draymond played 3 seasons together during which they won 2 straight NBA titles in 3 finals appearances. They were both vocal leaders who wanted to win but not compromise. This led to them having a very public beef, during which, Green called Durant a ‘b***h’ repeatedly due to uncertainty in his free agency decision. Even though Draymond poached KD from OKC, their relationship has been loud and messy.

The Golden State Warriors made the 2022 NBA finals for the first time since Kevin Durant left. There was a narrative that the only reason the Warriors won was because of how much talent they housed. However, they still won titles and no one could dispute that. But, seeing Golden State succeed had a direct effect on KD’s legacy and the importance of his rings.

This has led to Kevin being more vocal on Twitter and getting into arguments with his former teammate, Draymond Green.

“That game was back and forth my brother. I know you take everything personal and I know you want to take shots at everybody, that y’all won but the game was going back and forth. And they probably was up…He made it seem like I was choosing side, I wanted both of y’all play great basketball and if I could I wish both of y’all lost… What the f*** you talking about choosing sides bro?”

Kevin Durant addressed the situation on the Boardroom podcast. He stands by the claims that he has no bitter feeling for Green and the Warriors winning without him. Even though it hurt his legacy. But his stance on being unbiased whilst watching games will not be swayed by narratives that could force statements.

Draymond Green is as vocal as he is crazy and since the win he has not stopped bragging. Hopefully, he understands what Kevin is trying to say so that they can stop beefing on Twitter.