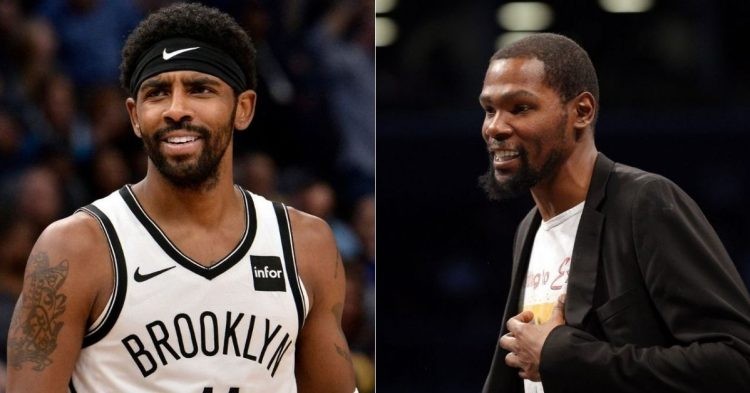 Brooklyn Nets are prepared to contend for the 2020-21 NBA Championship with a start-stubbed roster including 2014 MVP Kevin Durant, 2016 NBA Champion Kyrie Irving, and back-to-back MVP Steve Nash as their mentor and head coach. KD and Kyrie already have each other’s backs defending one another in interviews and on social media.

Past comments are being dug up, including the one where Kevin Durant drew an unfair comparison between Allen Iverson and Kyrie Irving. Durant made this comment when he was still playing for the Golden State Warriors after the 2017 NBA Finals on the Bill Simmons podcast.

Kevin Durant had immense respect for Kyrie Irving even before they decided to team up in the 2020 All-Star game. KD was in aw of Irving’s ball-handling skills and spoke at length about it. Another player that comes to mind when we talk about incredible ball-handling skills is the 4-time scoring champion, Allen Iverson. These comparisons between Allen Iverson and Kyrie Irving have been the topic of conversation for a long time and KD didn’t shy away from discussing it on the podcast.

After backlash from fans and media, Kevin Durant clarified his statement on Twitter saying he was comparing the two on a skill to skill level not overall. It would obviously be unfair to say Kyrie Irving is better than Allen Iverson as a player. While AI single-handedly carried the Philadelphia 76ers to the NBA finals in 2001 and gave Kobe Bryant and Shaq’s LA Lakers a chase for their ring, Irving spent his prime jumping from one team to another to prove his dominance yet failed miserably.

I was talkin about specific skill when I shot off the kyrie and AI thing.I think Kyries handle is a little better. Thats a legit take right?

Even though Kevin Durant specifically said that he was comparing them on the basis of ball-handling skills, his statement was taken out of context and was blown out of proportion by the media. Kevin Durant engaged in Twitter conversations about his comments and validated some people with replies

good point. He didn't need a bunch of dribbles.

No one in their right mind would compare an immensely gifted player like Allen Iverson to a somewhat selfish player like Kyrie Irving. He left LeBron James and the Cavaliers when they needed him the most to join Boston Celtics so that he could prove to people that he can lead a team as well. However, the Celtics were off when Kyrie Irving left them to join Brooklyn Nets with Kevin Durant.