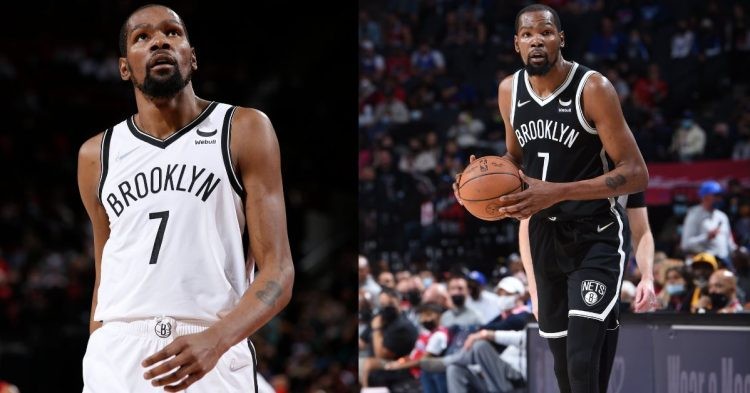 The Kevin Durant saga has taken yet another huge turn. Last week, Brooklyn Nets owner Joe Tsai publicly claimed that head coach Steve Nash had his support over KD. The reason for that was Durant’s ultimatum; keep him or Nash and GM Sean Marks.

Since then, there have been no developments in the trade situation. The NBA world expected a rumor fest including many teams in the league. However, only one has come out with their interest so far. Reports suggested that KD may want to join forces with James Harden and Joel Embiid to form a big 3 at the Philadelphia 76ers.

Will we see Kevin Durant in a Brooklyn Nets jersey next season?

Amid this, many sources have claimed that an NBA executive reported that Durant might retire from the NBA rather than play for the Nets ever again.

An NBA executive believes Kevin Durant is more likely to retire than play for the Nets again, per @TheSteinLine

There’s a ‘growing expectation’ that KD could cause ‘a ruckus’ to get the Nets to make a trade pic.twitter.com/ju01EPHIEM

The American has been in the league for 15 years. There have been very few players to have a longer career. As a player, he went through so many ups and downs. He certainly would not have wanted to retire this way.

Seeing the retirement rumors float around Twitter, Durant took it upon himself to respond to it. He tweeted, “I know most people will believe unnamed sources over me but if it’s anyone out there that’ll listen, I don’t plan on retiring anytime soon. Sh*t is comical at this point.”

I know most people will believe unnamed sources over me but if it’s anyone out there that’ll listen, I don’t plan on retiring anytime soon. Shit is comical at this point.

Now that we know he won’t be retiring anytime soon, what will his NBA future look like? A trade from the Nets is starting to look unlikely despite his meetings with the owner. NBA teams have found it hard to convince them with a trade offer to acquire Kevin Durant. We may even see him in a Nets jersey next season.