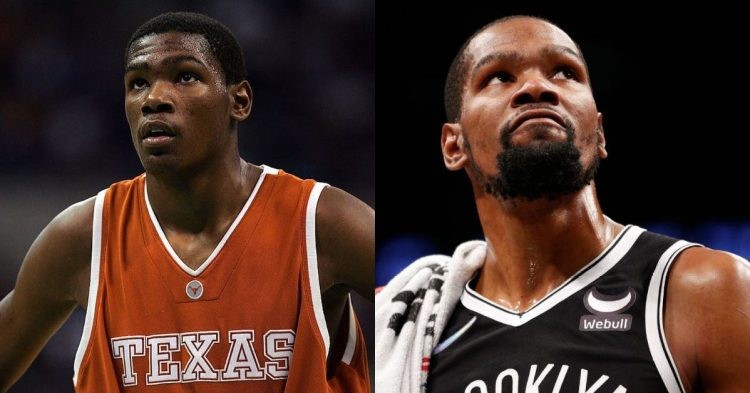 Kevin Durant back in college and present time (Credit- Twitter)

Kevin Durant is a 2x NBA champion and one of the molest talented scorers in the NBA. He is a veteran in the league and has been in the league for 14 years now. Durant was drafted by the Seattle Supersonics, which soon became the Oklahoma City Thunder. He spent the first 9 years of his NBA career with the same team.

Many NBA fans know KD soon decided to leave OKC after the 2016 season. Additionally, he joined the dominant defending conference champions, the Golden State Warriors. He spent 3 NBA seasons with GSW and left after the 2019 season. Coincidentally, he is with the Nets for 3 seasons now.

The hanging of a jersey in the rafters has always been somewhat of a tradition in the NBA. The greater the superstar, the more likely at least one franchise retires his\her jersey. It would interest people to know that Durant’s college jersey received the same honor. One must wonder which college team chose to give him this and how he played for them in his time there

It is no minor act to hang a player’s jersey in the stadium. Moreover, it can be considered an ultimate sign of respect and admiration for the level of basketball play displayed. Not many people know much about where KD went to college and his playstyle back then.

Kevin Durant went to the University of Texas. The name of the team there is “The Texas Longhorns” and they are considered a Division I basketball team in the United States. Additionally, the Longhorns also participate in the NCAA tournaments and other college-level basketball tournaments.

Many athletes have to show years of loyalty and great play in order to have their jerseys retired by their franchise. However, it is startling to realize that Durant’s jersey was retired by his college team despite him playing there for only a year.

It is also important to remember that many NBA players do not always complete college. They usually apply for the NBA draft after the first year or two of college basketball. Moreover, there have even been cases where hyped-up prospects are drafted straight out of high school.

Kevin Durant is set to be inducted into the University of Texas Athletics 2022 Hall of Fame this September.

KD averaged 25.8 points, 11.1 rebounds, and 1.3 assists per game. Additionally, he was 6’9 at the time and a versatile player. The Longhorns had a 25 win and 10 loss record in his time there. They must have clearly felt he did a lot to be a part of the success they saw. Therefore, it was decided that #35 be retired for him, although his professional basketball career had barely started at the time.