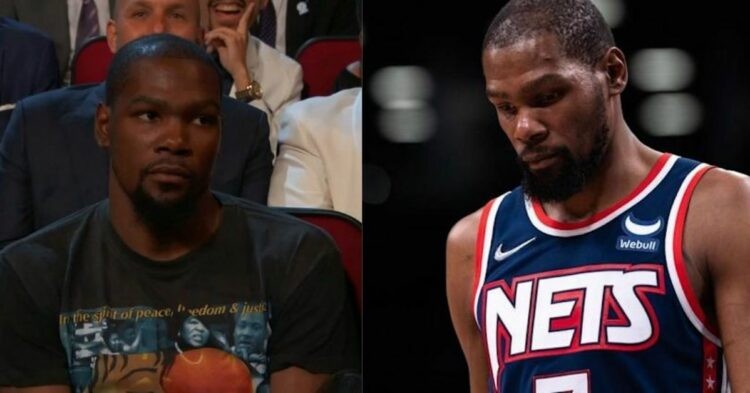 Kevin Durant is one of the greatest scorers of this generation. However, he has always had a reserved and shut-off personality. Durant joined the Brooklyn Nets three seasons ago. However, they are yet to even make the conference finals.

KD and the Brooklyn Nets were eliminated by the Boston Celtics. Additionally, they were swept. Their season was over in just 4 quick games. Following this, reports say Durant has avoided contact with the Brooklyn Nets management.

This is a difficult time for the Brooklyn Nets. They were hoping to at least get further than they did last year. However, they have done just the opposite. As they approach the off-season what are the reasons and implications of KD ghosting his own team.

Kevin Durant and the Nets front office have not spoken since they were swept out of the first round, per @Krisplashed

“…if Irving leaves the Nets, it wouldn’t be a surprise if Durant becomes frustrated with the organization’s ability to put championship pieces around him.” pic.twitter.com/oDm72lTVde

The NBA media is always bias a narrative. Kevin Durant wanted to play with Kyrie Irving. Therefore, they decided to go to the Brooklyn Nets. These are somewhat accepted facts.

James Harden was unhappy with the Rockets and wanted to be in a situation where he could win. Harden had his eyes on potentially Brooklyn or Philadelphia and went with Brooklyn initially. This is the sequence of events.

The media attempted to concoct this into Kevin Durant forming a new superteam in Brooklyn. Harden was arguably a much bigger disaster for the Nets than Kyrie Irving and soon demanded a trade following a rough patch of losses. The Nets grudgingly obliged and Ben Simmons was brought to the Nets.

Kevin Durant had absolutely no role to play in Harden choosing to come or wanting to leave. However, he was indirectly blamed and accused of having a lack of leadership.

Durant did, however, have a role in Kyrie coming to the Nets. Kyrie has played well for the Nets. However, he had several issues and missed the majority of games this season.

Durant has already had the Nets manage the roster situation once. That was the James Harden fiasco. Therefore, he is likely to be agitated if they make moves involving Kyrie. They may not give him a max contract and pay him as much as he likes. However, that is Kyrie’s problem.

KD simply needs to keep his head grounded on himself. One would hope he is avoiding the franchise out of guilt or shame as opposed to hostility and malice. He is their lead star and he let them down this season. Hopefully, he snaps out of this mood soon and is back to normal.