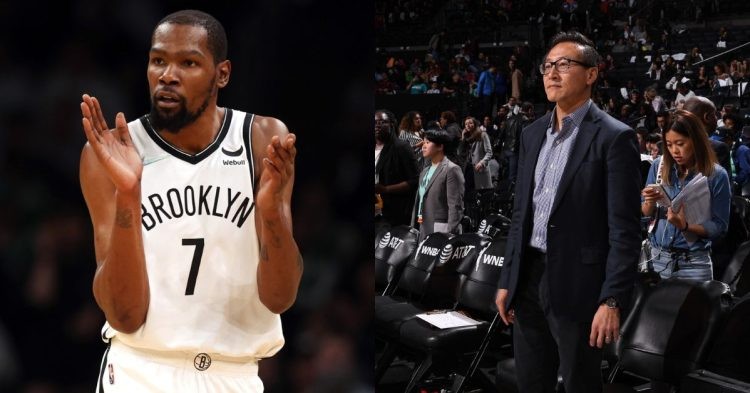 The Kevin Durant situation seems to be dragging on for more than a month. At this rate, it could even happen for a longer time than Kyrie Irving’s saga with the Brooklyn Nets. It all started when KD submitted a trade request. The decision came as a shock initially as it was right after the time Kyrie opted to stay with the Nets.

Many have called out KD for his lack of public appearance since his decision to leave. Former NBA player and TV presenter Kendrick Perkins even said the trade request was a “scare tactic” for KD to help Irving. Moreover, there have been many teams to approach the Nets with an offer. But nothing seems to convince them at this point as they are firm in their demands.

Earlier this month, reports suggested that KD was going to meet Brooklyn Nets owner Joe Tsai. The purpose of the meeting was to discuss his trade situation with the authority directly. We all knew that Durant was going to demand a trade, but what we did not see coming was his demands for Tsai.

Source tells me Kevin Durant is expected to meet with Nets owner this week: “I have no idea what’s going to come of that meeting. There are some things that KD is unhappy about, and I’m not sure any of that gets fixed here. But maybe it does.”https://t.co/Yk0HK8sAeW

Shams Charania reported that Durant gave a final ultimatum to the owner. He demanded that the franchise chooses between him and GM Sean Marks and head coach Steve Nash. Moreover, the reason for this is that the Nets guard does not believe in their approach.

If we’re being honest, the Nets have had a disastrous season. They lost to the Boston Celtics after making the playoffs this year. The Celtics did make it all the way to the finals, but the Nets could even win a single game. The series ended 4-0 to Boston.

The last time the Nets made it to the NBA Finals was in 2003, and it surely doesn’t look like it will happen anytime soon. Adding on, KD might be old, but he still has energy left in the tank. He has been the Nets’ best player since he joined in 2019. But it seems like they do not have the right players and people to guide them in the right direction.