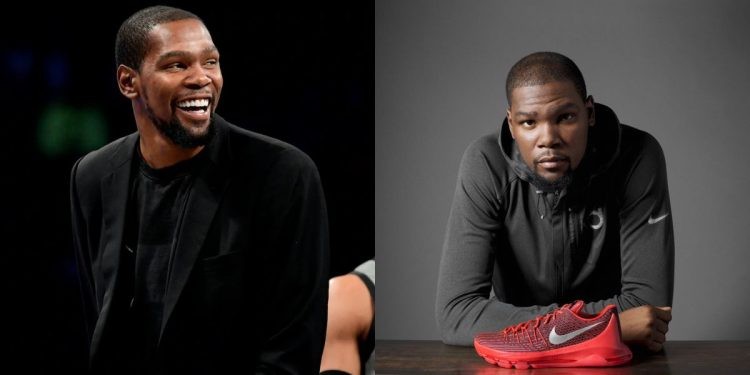 Some of the biggest sports brands in the world love to advocate their brand through big athletes. That could even lead to most of these athletes getting signature shoes of their own in collaboration with the brand. Some of the most successful ones have been Air Jordan and the LeBrons. Kevin Durant also owns a great signature shoe with Nike and has a message for his fan that showed off a pair of them that he was rocking.

Kevin Durant has not been having a great time since he left the Golden State Warriors. He’s had to deal with injuries, drama, sweeps, and seeing his former team win without him. His legacy has been hanging in the balance. But he’s still grabbing headlines for all the controversy he brings on Twitter.

Kevin Durant poses a challenge for his fan

KD signed a deal with sports giants Nike in 2007 after the season ended. He followed the steps of his collogue who had just also signed a deal with Nike, LeBron James. He had signed a 7-year $60 Million deal that allowed him to wear any Nike shoe at the games he played. It also meant that he got to release a signature shoe within a year.

In 2008, when the Supersonics moved to Oklahoma City, Kevin Durant unveiled his first signature shoe, the Nike Zoom KD 1. Almost 14 years later and he’s released another 14 iterations with multiple other colorways and has a small empire he can call his own. Also, his current contract with Nike could see him earning $300 million, which includes a $50 million retirement package.

He loves his shoes. And expects the players that play with them on need to have a great game to respect its value. On Twitter, one of his fans showed off his newly acquired Nike KD 8. And he tagged Kevin in hopes that he will see it.

If u don’t go get a bucket in those today then I don’t respect this post lol https://t.co/GNxA5nm8wp

In comparison to all the things Kevin Durant has posted on his Twitter, this is some of the more wholesome and fun content. This is also a great way to promote his shoes by letting the fans know that he could reply to them. Hopefully for Kevin Durant, everyone on his team next season also play as well as Durant expects them, to help him save his dying legacy.
Tags: Kevin DurantNIKE
Previous Post