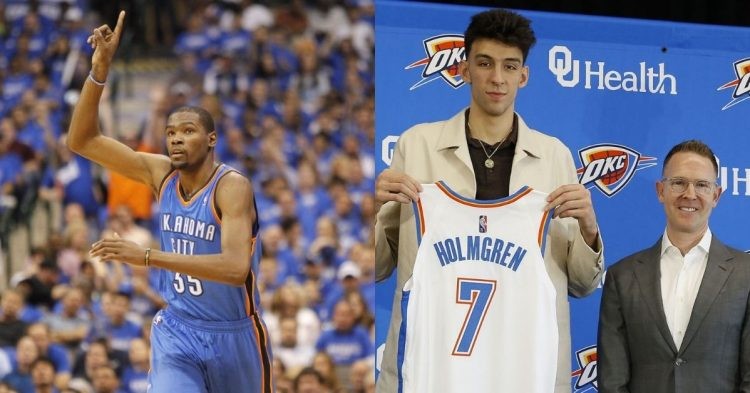 The Oklahoma City Thunder was forced into a rebuild a couple of seasons ago. They embraced the process by stocking up as many assets as they could. OKC has had great success on the draft before with Kevin Durant, Russell Westbrook, and James Harden as the best examples. And with their most recent pick, Chet Holmgren, they are looking to restart that winning process.

In the 2021-22 NBA draft, the Oklahoma City Thunder won themselves 3 first-round picks. One of which was the 2nd pick, one was the 12th pick from the Clippers, and the 30th pick as well. With those picks, they managed to draft Chet Holmgren from Gonzaga, and Jalen Williams from Santa Clara and traded the 30th pick to Denver.

Chet Holmgren was drafted 2nd overall by the Thunder. He’s a center but is tall and lanky. His biggest point of criticism is his lack of muscle. He was great at the collegiate level but the concerns scared the Magic from drafting him 1st overall. Chet fell to the Thunder who were overjoyed to make the selection.

The last time this franchise had the 2nd pick they had drafted a great college player who was tall, lanky, and weak. Even at that time, he was not drafted 1st overall due to his lack of muscle. But today, he’s one of the greatest players of this generation. His name is Kevin Durant.

Kevin Durant may have left the Thunder in the worst way imaginable. But during his time in the franchise, he became the greatest player in the NBA. And that’s what a lot of fans see in Chet Holmgren as well.

“I see u cookin 7. First day on the job was a success, love the kicks @ChetHolmgren”

I see u cookin 7. First day on the job was a success, love the kicks @ChetHolmgren https://t.co/sQrgDpPCU0

Chet Holmgren scored 23 points, seven rebounds, four assists, and six blocks in almost 24 minutes of playing time whilst rocking the KD 7’s. He shot it extremely efficiently from all areas of the court. His 3-point shooting was mesmerizing and hence the comparisons to KD became even easier. Durant saw this as an opportunity to advertise his shoes whilst congratulating the young center.

KD was once seen as the ‘Unicorn’ of the NBA. But what Chet could achieve in his career might even shadow that of Kevin.