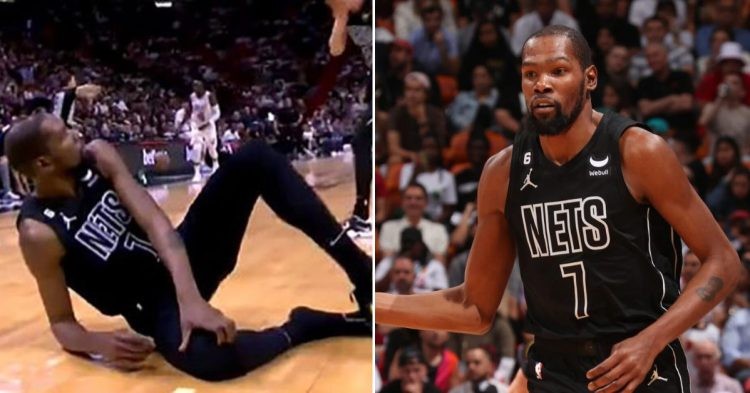 The Brooklyn Nets have turned their season around in style this year. Since Jacque Vaughn replaced Steve Nash on the sidelines, the Nets have been phenomenal. They went on a win streak that stretched to 13 games recently. One of the players who contributed to this massively would be Kevin Durant.

KD has been exceptional during the 2022-23 NBA season for the Nets. During the summer, there were many reports of his trade and the saga never seemed to end. Along with that, his best friend and teammate Kyrie Irving was dealing with his off-the-court issues as well. One can only assume how distracting this must have been for Durant. He has claimed in the past that he requested a trade because of the lack of stability in the Nets franchise.

It looks like that has been fixed right now, as Durant looks to be back to his very best. He has averaged 29.7 points, 6.7 rebounds, and 5.3 assists this season. However, he has another issue to worry about right now. When the Nets faced the Miami Heat last night, KD collided with Jimmy Butler and suffered an injury.

What injury did Kevin Durant suffer?

In the third quarter, the Nets were leading by just two points, when Butler attempted a drive to the rim. He was locked out by Ben Simmons, however. When Butler landed, his back collided with KD and it looked like his right knee got hurt in the process too.

The Nets say that Kevin Durant is OUT for the remainder of Nets-Heat due to a right knee injury after Jimmy Butler fell on his knee on this play.

Prayers up to KD 🙏 pic.twitter.com/v0PPP9Hfe1

He went to the locker room for the Nets staff to evaluate him. But the New York-based franchise decided to play it safe and announced that he wouldn’t be returning back to the game. Durant was on to a good one on the night, he was the second-best player on the team after Kyrie Irving despite missing a quarter of the game.

Kevin Durant could be looking at another MCL sprain.

He injured the MCL in his left knee last year and missed ~ 6 weeks.

Tonight he injured his right knee but we don’t have an official diagnosis yet.

The franchise hasn’t announced how serious the injury is but we can expect some news very soon. Many claim that it looks like a MCL injury. For context, Durant has had two MCL sprains on his other knee (left) and missed more than a month of action. We can only hope that the 2x NBA champ’s injury isn’t significant and he’s back in action soon.