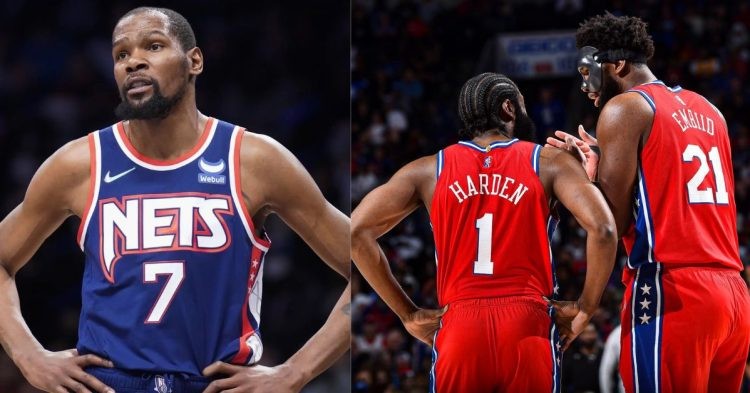 The Brooklyn Nets may finally put an end to their situation with their star player Kevin Durant. A couple of days ago, reports emerged saying KD gave Nets owner Joe Tsai an ultimatum. He demanded that the franchise chooses between him and Steve Nash and Sean Marks.

The move backfired on him after Tsai hinted that he will be backing Nash in the situation. It seems like KD might be leaving after all. No player is bigger than the team, and we can expect the Nets knew this as well. If we think about the trade deal, they will surely be looking for a good package to let Durant go.

When Durant submitted his trade request, it was evident that the Philadelphia 76ers were one of the teams that could go for him. Moreover, they are one of the teams that definitely need Durant. You may think at 33, KD has slowed done. However, that has not been the case. The American averaged 29.9 points, 7.4 rebounds, and 6.4 assists per game during the regular season from 2021-22

Those are not ordinary numbers for any player, let alone for one whom fans claim is “finished” and “overrated”. If he gets his wish, which is moving to the 76ers, that team will be unstoppable. The Sixers currently have Joel Embiid and former Nets player James Harden.

Some ‘high-ranking members’ of the 76ers remain interested in discussing a Kevin Durant trade with the Nets. 👀 pic.twitter.com/fQ4BB2pgTY

It seems like KD will be able to play with a healthy Harden after all. With these three on the same team, the 76ers will become a superteam. If Harden hadn’t signed as a free agent and taken a pay cut, the move for KD would have been harder for the Sixers. But the salary he freed up could be used to build a better team to capture the NBA title, which is what Harden wanted.

Both KD and The Beard have caused the rumors of the move to be stronger. A couple of days ago, cameras captured the pair working out at the same court in Barcelona.

Although it might be an exaggeration, there have been reports of the two players spending more time with each other lately. With everything that has been going on, it only seems like the move is highly likely.

Durant won the title with the Golden State Warriors in 2017, after a year at The Bay. If things go right in Philly, the same thing might happen again. Although they might not be able to replicate the Warriors’ dominance, they might still be one of the best teams in the league. They would have the right team to contend for the title, but that would only be possible with the right tactics and strategies from the coaches.