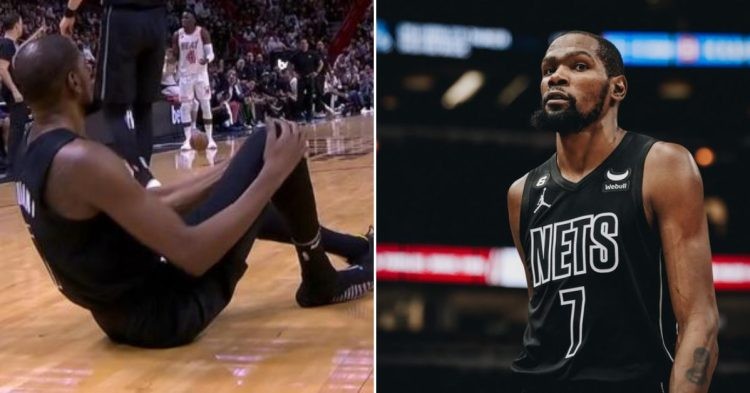 Brooklyn Nets superstar Kevin Durant has been the team’s best player so far this season. He helped the New York-based franchise to win 13 games in a row recently. Unfortunately for the 2x NBA champ, he hit a bump in the road in the last game against the Miami Heat. For context, KD collided with Jimmy Butler in the third quarter and had to leave the game early.

Breaking: Kevin Durant has been diagnosed with an isolated MCL sprain of the right knee and he’ll be re-evaluated in two weeks, the Nets announced.

There’s optimism Durant will miss less time than he did with a six-week absence last season, according to @wojespn. pic.twitter.com/7eLYBOKluG

NBA fans were left concerned for the player as he has been phenomenal so far this season. The Nets did not announce the type of injury that Durant suffered until recently. According to Adrian Wojnarowski, Durant has suffered an MCL sprain and will be on the sidelines for a while.

When will Kevin Durant return from injury?

Wojnarowski has mentioned that the Nets medical team will re-evaluate Durant in another two weeks. His injury will surely be a huge blow for the franchise, mainly because of how big a role he played in their success this season. Apart from that, his return date is still a huge question mark as well. The last time Durant suffered an MCL sprain, he was on the sidelines for six weeks. Could that be the case again?

For those who don’t know, a Medial Collateral Ligament (MCL) sprain is when the ligament that is located on the inner side of the knee is damaged. Fortunately for KD, this was not the same knee that he injured a while ago. He has suffered two MCL sprain injuries on his left knee so far. This time around, he has sprained his MCL on the right knee.

Kevin Durant could be looking at another MCL sprain.

He injured the MCL in his left knee last year and missed ~ 6 weeks.

Tonight he injured his right knee but we don’t have an official diagnosis yet.

Nets fans have been worried about how long it could take for Durant to recover. On average, it takes about six weeks for one to heal from an MCL sprain. However, sources say that his most recent injury is highly unlikely to keep him away for more than a month. If all goes right, Durant should be back in action during the second week of February to face the Chicago Bulls.

The Nets will miss a huge figure on the court and in the locker room as well. Now that Durant is out for a while, the pressure will mount on Kyrie Irving’s shoulders to perform for the Nets. We would have to wait and see if the Nets make any moves in the market to make sure their playoff chances don’t take a hit.