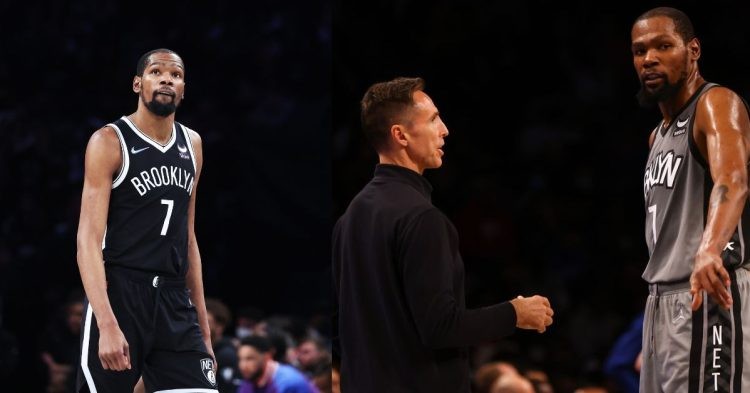 The Kevin Durant trade situation seems to be dragging longer than Kyrie Irving‘s vaccination issue. We all know it started when KD choose to hand in a trade request a day after Kyrie chose to opt-in. That came as a shock to many. If we think about it, who wouldn’t want to be on the same team as Kyrie, one of the best players in the world?

That decision hinted that Durant knew something from the inside that we didn’t know. The Brooklyn Nets haven’t been able to succeed on the court since KD came to the team. Now he is a player who still has plenty left in the tank, and we all know he wants to go for another championship ring. And if Brooklyn isn’t the right place to do it, why stay?

Recently, reports suggested that Kevin Durant decided to be open with Brooklyn Nets owner Joe Tsai. He gave a final ultimatum to him yesterday. The Nets guard demanded that the board can only keep him, or head coach Steve Nash and GM Sean Marks.

It became evident that the 33-year-old does not believe in the direction the Nets are headed. The team’s failures could also be consequences of bad man-management from the franchise. They brought in Kyrie, KD, and James Harden to form a super team. However, fate had different plans and Harden ended up wanting to leave.

After the reports of what KD said during his meeting, the owner himself tweeted later on. He said, “Our front office and coaching staff have my support. We will make decisions in the best interest of the Brooklyn Nets.” Let’s be honest here. Durant’s time in Brooklyn is mostly up. Joe Tsai just admitted that the coaching staff has his support. That would mean the Nets will most likely choose to keep Steve Nash instead of Kevin Durant.

Although they will miss Durant, it is not something they cannot overcome. The Nets still have a talented roster that includes Kyrie and Ben Simmons. Moreover, they can still get someone effective for the team from the KD trade.