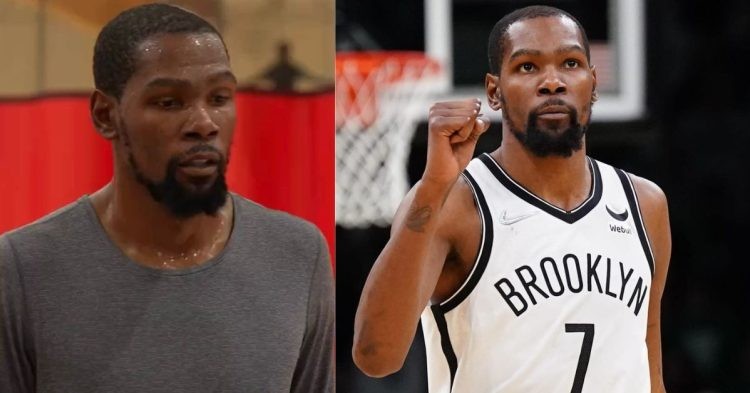 It seems like Kevin Durant is back on track now. Ever since he requested a trade, KD has kept his public appearances limited. To this day, he hasn’t spoken out about the situation with the Brooklyn Nets. Moreover, the reason for his request is still unknown.

The past few days have been fun for Kevin Durant fans. Recently the American hilariously announced himself to the TikTok world after creating his first video. If that wasn’t enough content for KD fans, he returned to the court to play against NBA players after a long time.

Kevin Durant works on getting back in shape

In the video, Durant was seen playing with Spencer Dinwiddie. During the initial stages of KD’s trade rumors, there were reports of the Dallas Mavericks looking to acquire him. Reports mentioned that they were willing to offload Spencer in the same deal.

However, we all know that wouldn’t be enough for the Nets to cave into giving the Mavs their best player. Another NBA athlete he played with would be Evan Mobley. He was one of the standout performers for the Cleveland Cavaliers last season and is expected to lead them to the playoffs next time around.

It seems like Durant still has the exceptional form from during the season. This year, he averaged 29.9 points, 7.4 rebounds, and 6.4 assists during the regular season. Despite performing decently and finishing 7th in the Eastern Conference table, the Nets’ playoffs journey ended in a disaster.

They failed to win a single game against the Boston Celtics, who eventually went to the Finals. The series ended 4-0 to the Celtics. However, in the Nets’ defense, two of those four games were in fact pretty close, as they lost by four or fewer point difference.

KD will be looking to be on top form next season. He knows he isn’t getting any younger at 33 years old. We can assume that the main reason why he requested a trade would be a ring. The last time he won an NBA title was with the Golden State Warriors in 2019.