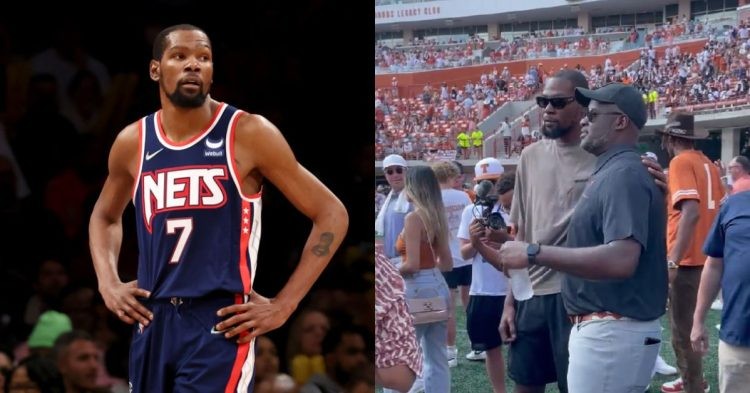 Brooklyn Nets superstar Kevin Durant decided to take some time away from his world of basketball. KD was recently spotted having a moment with NFL legend Vince Young. This occurred when the Texas Longhorns faced off against the Alabama Crimson Tide.

Vince Young is a former Longhorn himself and led Texas to a national championship in 2005. Moreover, he used to be quite the player and finished that season with 3036 yards passing and 1050 yards rushing. We all know that the 2x NBA Finals MVP is from Texas as well. Both these former Texas Longhorns and legends shared a personal moment and greeted each other during the early stages of the game.

To those interested, the Texas Longhorns are the sports team for the University of Texas at Austin. They have a variety of sports including basketball and American Football. While KD may not have been on the field as an NFL player, he is still undisputedly a Longhorn.

Kevin Durant may have played only one season in college. But, he still feels the need to represent the Longhorns. He averaged 25.8 points and 11.1 rebounds in his time with them. Additionally, Durant helped carry the team to the #4th seed in the 2008 NCAA tournament.

It is easy for KD to show loyalty to a former college. He is definitely one of the best athletes to come out of Texas and still wants the Longhorns to do better. Both Durant and Young would love for the Texas Longhorns to become relevant again and compete at a national level.

Be that as it may, Durant simply has bigger problems at the moment. His old college doing better can hardly be considered a real priority. He requested a sudden trade from the Brooklyn Nets. Moreover, KD attempted to condition his staying in return for a change of management. However, his request was denied and he soon officially rescinded his trade request.

We hope the 2x NBA champion is able to find the mental peace and calm required in order to display his skills this season. Durant should be allowed to enjoy his offseason and rekindle his old roots. That should allow him to get ready for the 2022-2023 NBA season.