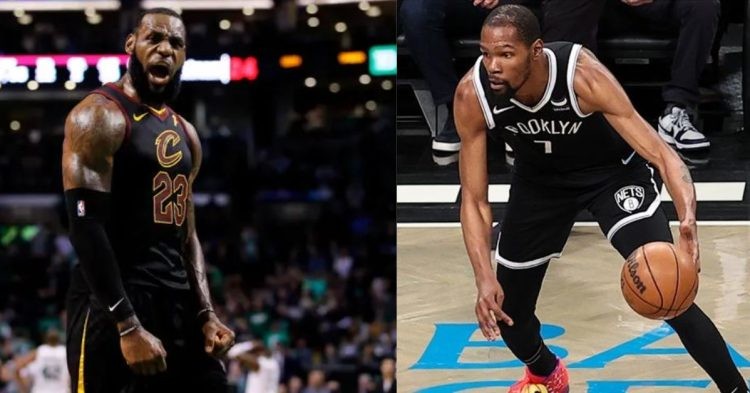 LeBron James with the Cleveland Cavaliers and Kevin Durant with the Brooklyn Nets (Credit: Twitter)

Kevin Durant has finally reached a career total of 26,000 points scored in the NBA. Moreover, he has done so in the same amount of games that LeBron James took.

KD is currently a veteran in this league and is entering his 15th year. While King James is currently in his 20th year and chasing after Kareem Abdul Jabbar’s all-time scoring record. Some NBA fans might already know that Kareem accumulated over 38,000 points in his career.

They both reached that mark in the same amount of games: 955 🤯 pic.twitter.com/pkQVYGM524

There is clearly a long way to go between 26,000 points and 38,000 points. However, the statistics prove that KD has done it in the same amount of time as LeBron. All of this has the potential to confuse fans and warrants an explanation.

LeBron James is the youngest NBA player to score 26,000 points

To those who are interested, LeBron James was 31 years and a month old when he managed to accumulate 26,000 points. This was actually the fastest a player had ever reached there. He even managed to surpass Kobe Bryant in how fast this was accomplished. Since then, he played incredibly well and consistently. Therefore, he is now fighting for and eventually expected to take the title as the NBA’s all-time leading scorer.

On the other hand, Durant is currently 34 years old. A full three years older than LeBron when he achieved the same feat. However, we shouldn’t let this diminish Durant’s greatness as he did it in the same amount of games as LeBron James. Both of them had played exactly 955 NBA games in order to reach 26k points scored. The reason that Kevin is older is simply the fact that he had a serious potentially career-ending injury right in the middle of his prime.

We are clearly talking about the 2019 NBA Finals. There Durant suffered a torn Achilles tendon. As a result, he had to spend the entire next season in rehabilitation. Finally, he was able to make an appearance back on the court and continue playing.

While this is certainly the worst injury in KD’s career, it is not the only one. In comparison, LeBron has remained completely invulnerable throughout the majority of his career. Except towards the end as we can currently see with the Los Angeles Lakers.

In any case, we should commend Kevin Durant for being able to accomplish this feat in the same amount of games as LeBron James. They are certainly two of the greatest players of this generation and should be respected.