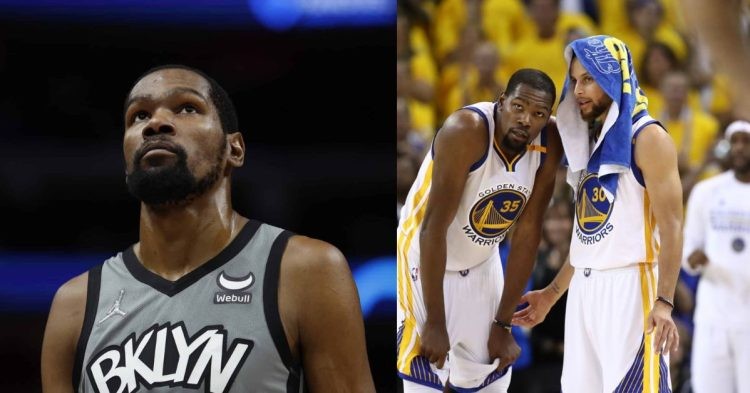 Kevin Durant has been at the center of all the attention in the NBA ever since he requested a trade to move out from the Brooklyn Nets. Reports say that there have been many teams that were ready to go for KD. One of those teams was the Golden State Warriors.

The Warriors just won their seventh championship and their fourth in 8 years. Those are ridiculous achievements for any team. But the Warriors have just resumed their dynasty in the league. It all started in 2015 when they won their first title since 1975. That was also their first ever title with the trio of Stephen Curry, Klay Thompson, and Draymond Green.

KD joined the Warriors in 2016. Everyone knew that the team with him was going to be a powerhouse. They had just come off a 73-9 record the season before. With KD, the team was going to be dangerous. And it was just that. In 2017 and 2018, GSW won back-to-back titles, with Durant bringing home the Finals MVP twice in a row.

He had the best spell in his career. In 208 games, he averaged 25.8 points, 7.1 rebounds, and 5.4 assists for the Warriors. Statistics show that KD has been instrumental in the Warriors’ success in the past. But does that mean they should go for him again this year?

ESPN’s Kendra Andrews recently gave an update on the ongoing talks between the two teams. She featured in The Lowe Post podcast, where she went into the details.

Nets asking for Kevin Durant from the Warriors:

Talks between the Nets and Warriors reportedly ‘fizzled out’ per @kendra__andrews pic.twitter.com/p05NlsuSR9

To be honest, no NBA team can offer the Nets what they’re asking for. They want the best young players from The Bay. Jordan Poole and Andrew Wiggins were two of the best players for their team last season. Both of them stepped up for the Warriors when they needed them to.

Adding on, the Nets reportedly also want James Wiseman. The youngster was the second overall pick in the 2020 NBA Draft. If that wasn’t enough, they also want the first-round picks available to GSW.

It is quite obvious what the Nets board is trying to do. They know KD is one of the best players on the planet despite his age. If they are going to let him go, they will only do so for some talented players who can give them an NBA championship.

In conclusion, the Warriors have decided that their current title-winning team is enough to go another season. The main reason the deal fell through would be the Nets’ demands. There were even reports of the GSW stars being ready to welcome KD back to the team.