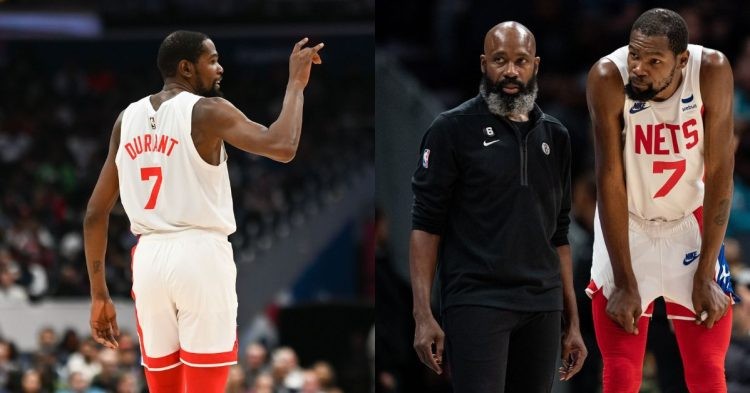 With Kyrie Irving out and Ben Simmons not available half of the time, Kevin Durant has been left alone to shoulder the entire responsibility for the success of the Nets. Kevin has had to carry the team on his back for a while now. If you take a look at his supporting cast then it’s evident that Kevin has done a decent job.

If it wasn’t for him the Nets would probably be at the bottom of the barrel right now. Durant was recently asked about the hiring of Jacque Vaughn and the whole Steve Nash situation in Brooklyn. This is what he had to say about it.

“I wasn’t feeling that, and nobody was on that same vibe with me. Jacque Vaughn is. I had some complaints in the summer, and my complaints were not about just me; it was about how we are moving as a unit, I want us to be respected out here in the basketball world. I don’t want players to look at us and say, ‘Oh man, these b*tches are full of s–t. That’s not the type of team I want to be on.”

Now, going by whatever Durant said, it is evident that Jacque Vaughn was suitable for the job because he and KD were on the same page.

Kevin Durant as the star and Steve Nash as the coach had completely different visions for the team. Durant even said that he didn’t like the way that the team operated when Nash was the head coach. Here’s what he had to say about the whole situation in comparison to Jacque Vaughn’s leadership.

“That’s what I said last summer. I didn’t feel like we had those things last year like good preparation, and great energy to start real team chemistry, and I feel like we’re building that right now. We got some guys in and out of the lineup, but I think guys have been figuring out their roles within that. And it’s been fun, regardless of games like tonight”

And, no, it “was not up to Kevin” Durant. https://t.co/ppJRflHi8z pic.twitter.com/ZfVwrOYJzR

Some believe that Kevin was a direct influence behind the firing of Steve Nash. Though the Nets GM Sean Marks has since cleared the air by saying that Kevin had nothing to do with it. The Nets are finally headed in the right direction.

Once Kyrie comes back it’ll be interesting to see just how far this team can go with this newfound life.