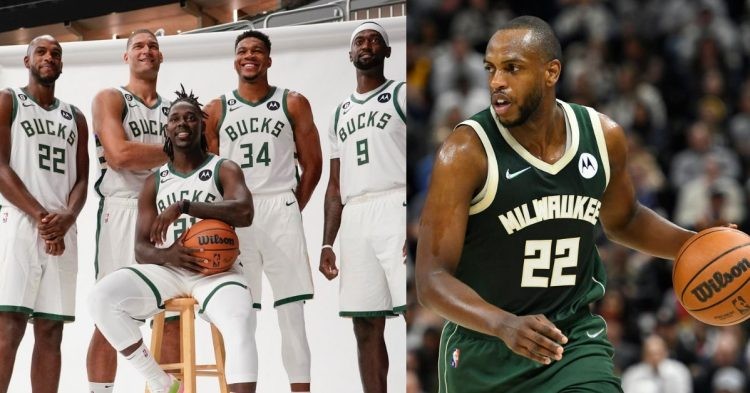 The Milwaukee Bucks have been rolling through the NBA with a perfect 9-0 start to their season. Throughout these games, Giannis has been absolutely phenomenal for the bucks averaging 32.6 points per game, Jrue Holiday has also been amazing with averages of 20.0 points and 8.0 assists per game.

Jrue Holiday over his last 5 games:

The Bucks have the best record in the NBA and they have been doing all this with a star missing, Khris Middleton has not played in any of the Bucks’s games so far. Let’s have a look at why this has been the case.

Middleton actually went on to explain that the injury occurred sometime after the 2022 All-Star break, he then went on to play the rest of the season with a torn ligament. Even without him, The Bucks have been off to the best start in franchise history.

The best start in franchise history is just another step. We keep building. pic.twitter.com/8SZv4H6MTo

The Bucks are as scary as ever and they’ll only get better once Khris Middleton is back, he will come back and add a lot of defense to the team along with some excellent three-point shooting. Middleton has been making good progress with his injury rehab, the Bucks expect him to start participating in games sometime around mid to the end of November.

Even though it is very early in the season, the Bucks have looked extremely strong, and as the season progresses and their chemistry improves they will only get better. Soon they will get Khris Middleton back in the lineup, and when you add him to the lineup with a scalding hot Giannis Antetokounmpo and Jrue Holiday the Bucks will be unstoppable.

If they can continue with this level of play the Bucks will surely be favorites to win it all this season. This will also do wonders for Antetokounmpo’s legacy and solidify him as an all-time great and one of the best players of his generation.