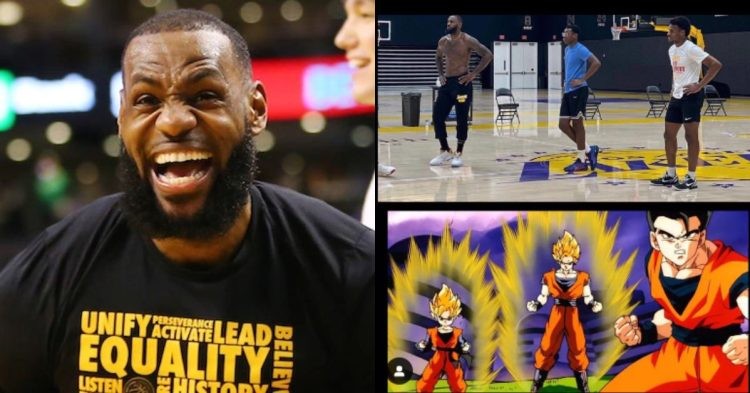 LeBron James is entering year 20 in the NBA. He is a 4x champion and has managed to play at a high level the whole way. In fact, he is in such good shape, that he was seen throwing down dunks with his sons Bronny and Bryce James. The superstar has already expressed intent to play with his oldest son in the league. With Bryce joining them and showing the talent of his own, the media is in a frenzy.

King James has always embraced the attention and has never hid from the spotlight in his life. He shared a photo on Instagram, editing him and his children and comparing them to Goku, Gohan, and Goten. To those who do not know, these are anime characters from the popular fighting series Dragon Ball Z. Since there aren’t too many NBA fans who watch anime, this post may have perplexed many.

It will do good to know who Goku is and why LeBron feels a sense of identification with this anime character.

There are several similarities between Goku and LeBron James. Both of them have two sons. They are also blindly dedicated to their craft and getting stronger. The eeriest similarity between them is how they have gotten stronger over time. Most people get weaker as they age. However, Goku is still getting stronger as the years go on. Moreover, he seems to relish the opportunity for a new challenge and is always up for it.

LeBron James is playing some of the best basketball we have ever witnessed from him. He averaged 30.2 points, 8.2 rebounds, and 6.2 assists this season with the Los Angeles Lakers. There are few players if any who are capable of averaging these numbers after 15 or 16 years in the league.

One should also wonder if LeBron is hinting that his children, Bronny and Bryce show as much potential as Gohan and Goten do in the anime series. In any case, he is definitely comparing working out and throwing down dunks with his children to the anime. It is difficult to pinpoint exactly how well-versed King James is with the anime and he may have shared the photo for other reasons. Nonetheless, this is an apt post and had several reactions from the fans.

LeBron James is quite the all-rounder. The phrase “le” followed by something has spread like wildfire on the internet.  “Leflop”, “LeGM” “Lebrick“, the list is really endless. The Instagram followers for the King who liked these comments are likely Dragon Ball Z fans who understand the reference.