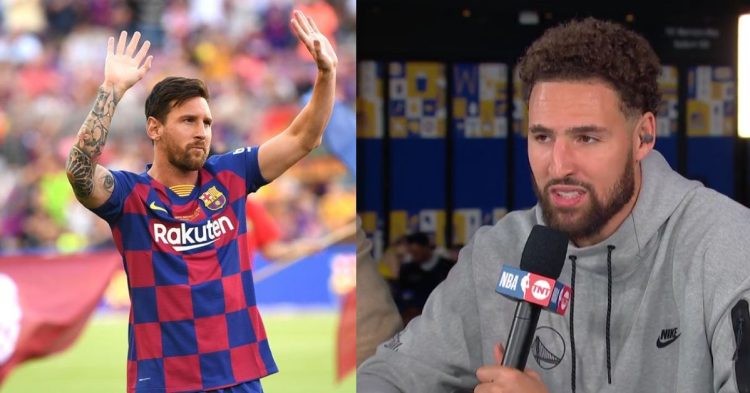 Despite being injured in the 2019 NBA finals, Klay Thompson has managed to help Stephen Curry and the Golden State Warriors win their 4th title together in 2022. This is quite a remarkable achievement considering that many analysts ruled them out of contention after Kevin Durant left.

He was recently interviewed and asked about the reasons behind the Golden State Warriors success. To many people’s surprise, Klay revealed that Football star Lionel Messi’s former team FC Barcelona is hugely responsible for the achievements and playstyle of the Warriors.

One may want to understand what exactly Klay is talking about. After all, football and basketball are very different sports and few can understand the similarities between the two.

Football fans know how successful FC Barcelona has been over the years. It is worth over $5 billion dollars and for good reason. Barcelona is one of the only teams ever to win 6 trophies in a single year. Doing so requires winning 3 national titles, two international titles in the continent, and the international worldwide title.

That clearly proves they were the best team for the year and makes them undisputed champions of the football world. A large portion of FC Barcelona’s success is due to the unique playstyle that they incorporate called tiki-taka. The style involves a constant passing system and always finding the open man in any situation. Thompson revealed how this strategy plays to the Warriors’ strengths.

Klay did not take credit for the incorporation of this style for the Warriors himself. It deserves to go towards Steve Kerr, the GSW coach behind their successful deep postseason runs and multiple championships over the decade.

Klay Thompson says Steve Kerr and the Warriors base their game on Barcelona’s tiki-taka 🤝 pic.twitter.com/GPGSTELZlH

“I mean he (Steve Kerr) gave us the perfect example in FC Barcelona, they called tiki-taka. It’s just kick to the open man and with us, it’s hit the open man, keep moving. And it just plays to me and Steph’s strengths so much.”

The Warriors certainly have a beautiful ball movement system. They exploit constant rotations and offensive schemes to get their teammates good-quality looks. After all, they have the best sharpshooting backcourt in perhaps the history of the NBA with Stephen Curry and Klay Thompson.
Tags: Klay ThompsonNBAStephen Curry
Previous Post